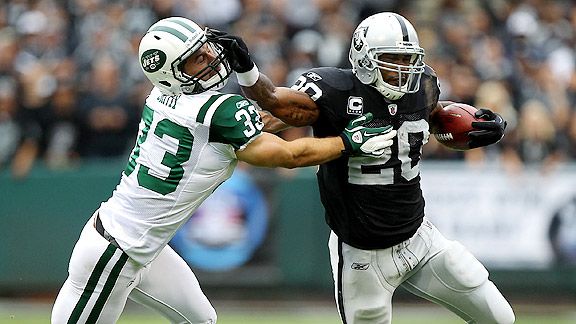 The Patriots are hoping not to be on the other end of many Darren McFadden stiff arms on Sunday.

FOXBOROUGH, Mass. -- Going up against the league's top rushing offense, the Patriots know the defensive game plan is pretty simple this week: Stop the run. More specifically, New England is focused on stopping No. 20.

Now in his fourth season, Oakland running back Darren McFadden has rushed for a league-best 393 yards on 61 carries (6.4 yards per trot) with three touchdowns (including a 70-yard jaunt last week vs. the Jets). He's also caught 11 passes for 84 yards and his 477 total yards from scrimmage is tops in the league (tied with Patriots receiver Wes Welker).

Even though the Patriots haven't seen McFadden since his rookie season, the team is no stranger to what he can do. He carried 12 times for 46 yards and a fourth-quarter touchdown during New England's 49-26 triumph in Oakland in 2008. McFadden also caught three passes for a team-high 68 yards that day.

"McFadden is a great guy with the ball in hands," said linebacker Jerod Mayo. "Tackling him will be an issue. We’ve been practicing that as well. Hopefully we can do good this week."

"He’s a big guy and he’s fast," said Mayo. "[He] has a great stiff arm and he can catch the ball out of the backfield -- very explosive player. I have a little bit of a history with him. Good player and it will be a challenge for us."

That suggestion of gang tackling was prevalent in the Patriots locker room and clearly an emphasis had been made on it. Asked how a teammate could help prepare the defense for a back like McFadden, safety Patrick Chung quipped, "Keep running."