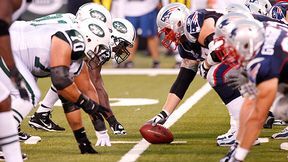 Patriots vs. Jets ... let the hype begin.Meetings between the New England Patriots and New York Jets never lack for hype. But if you were hoping for something outlandish from inside the walls at Gillette Stadium, it didn't happen Tuesday as the Patriots formally turned their attention to Sunday's AFC East clash in Foxborough.

New England players enjoyed their typical Tuesday offday, while members of the coaching staff held conference calls with the local media and kept the early week hype to a minimum.

"It’s a division game, so of course it’s a big game -- all division games are," Patriots coach Bill Belichick said when asked whether he gets more excited for Jets week. "This is the next one. We'll put everything we’ve got into this one. Then, when it’s over, we’ll take a look at it, move on, and put everything into the next week. It’s obviously an important game, we'll do the best we can to maximize our preparation opportunities and be ready to go on Sunday."

In fact, maybe the only eyebrow-raising aspect of the afternoon calls featuring Belichick, offensive coordinator Bill O'Brien, and defensive line coach Pepper Johnson, was that Belichick acknowledged the Patriots kicked the tires on wide receiver Plaxico Burress this offseason, but stressed it was no different than any other free agent evaluation process.

Belichick said the Patriots won't put too much of an emphasis on last year's playoff loss to the Jets, noting his staff used an extended summer to review previous games and start the game-planning process this season.

"We’ll look at all the [Patriots-Jets] games last year, all the preseason games, and all the regular-season games -- we've seen them all," said Belichick. "In the offseason, when we do our out-of-season data reports, that’s really when you go back and can really spend time on the previous year's games. You take the info you have out of that, the ideas or whatever, and you look at this year's stuff, then you come up with a game plan -- figure out what you want to do."

Asked if he wanted his returning players to remember the sting of going 14-2 last season and losing to the Jets in New England's postseason opener, Belichick said simply, "We're trying to go out there and play well, that’s what we try to do every week. We’ve won plenty of games in the past, we’ve lost some. Those games really don’t have much bearing on this one."