A weekly look at the tackle leaderboard (as credited by coaches after film review): 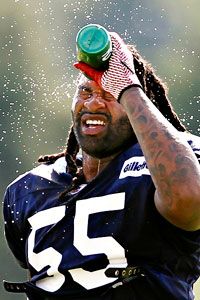 Brandon Spikes is climbing the tackle leaderboard for the Patriots.

DEFENSIVE NOTES: LB Brandon Spikes had a big rise this week after a six-tackle game in Oakland. That was his type of game, with physical downhill play, and this one could be as well if the Jets do indeed plan to get back to "ground and pound." Spikes' playing time has increased over the last two weeks as he is becoming more of a factor. One the flip side, he did seem to be partly responsible for Darren McFadden's 41-yard run in the second quarter. ... CB Kyle Arrington leads the team with 3 interceptions and 5 passes defended, but he can hear the footsteps of DT Vince Wilfork, who is right behind with 2 interceptions. ... In two games, DT Albert Haynesworth has been credited with two tackles and two drawn holding penalties, both coming in the season opener. ... Former New York Jets DL Shaun Ellis has been charted on the field for 165 of 284 snaps (penalties included). His stat line: 4 tackles, 1 quarterback hit.