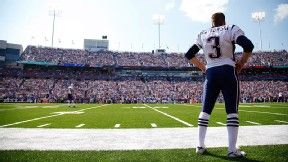 Stephen Gostkowski and kickoffs are a big reason for New England's success.

We've long been told the best defense is a good offense. The Patriots are proving it again this season, but maybe not for the obvious reasons.

Part of New England's success this season -- despite a defense that, based on yards allowed, is the worst in NFL history through four games -- has been a result of opponent field position. According to drive stats logged by Football Outsiders, the Patriots lead the NFL with opponents' average starting position at the 20.98 yard line. That's nearly 2 yards better than the next closest team (Tampa Bay, 22.88) and more than 7 yards better than the league average. By comparison, the Chiefs are last in the NFL, allowing an average starting position at the 35.43 yard line (Kansas City, of course, is 1-3 and has been outscored by 77 points overall this season).

Even though Bill Belichick decried the NFL's decision to move kickoffs up 5 yards this season, maybe no team has benefited more than the Patriots. Thanks in large part to an offense that has scored 17 touchdowns and kicked five field goals, the Patriots have often kicked off to opponents before their drives and the new rules is leading to increased touchbacks (or more daunting runbacks from their own end zone). It does help that the Patriots have been rock solid on kick coverage, with opponents averaging a mere 19.3 yards over 14 returns (with a long of 27 yards).

But here's the bottom line: When teams are being forced to cover 80 yards per drive, the Patriots can give up 500-yards of offense and limit the damage overall on the scoreboard.

In fact, according to those Football Outsider numbers, the Patriots are giving up a league-worst 45.95 yards per drive (the league average is more than 14 yards less per drive). New England has been able to tighten up in the red zone in three of their four games, and further aided their cause with timely turnovers.

Those yards saved at the start of the drive might be the difference between Patrick Chung's end zone interception (on a play that started at the Patriots 6) and the Raiders punching the ball in a few players earlier.

Yes, averaging 33.8 points per game is going to aid any defense, but things could be a lot worse for New England given how much yardage its defense has allowed. Starting position fueled by that offense has gone a long way towards limiting the damage done by opponents.