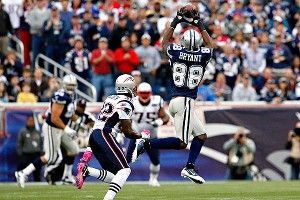 Patriots cornerback Devin McCourty can't stop this completion vs. Dallas.Last week we looked at how New England cornerbacks have fared when targeted by opposing quarterbacks this season. This week we've expanded to give a glimpse of how safeties are faring. All data courtesy of analytical site Pro Football Focus.

First a quick look back at last week's game against Dallas. Both cornerback Devin McCourty and linebacker Gary Guyton struggled in pass coverage in the win. According to PFF numbers, McCourty gave up five catches for 70 yards on six targets, including Jason Witten's touchdown grab, while Dallas quarterback Tony Romo completed all five passes he threw at Guyton for a total of 58 yards.

McCourty remains the most targeted cornerback in the NFL (but should lose that distinction during the bye week). Here's an updated look at the target stats through six games:

How Patriots defensive backs have fared this season in defending the pass.