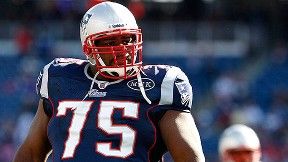 Patriots defensive tackle Vince Wilfork's workload has increased this season.The bye weekend offered an opportunity to step back, tie up loose ends, and update some statistical files. In doing so, the increased role of defensive lineman Vince Wilfork was one area that stood out.

Wilfork is one defender who seems most affected by the team's scheme change from a 3-4 to 4-3.

In previous years, Wilfork has been more of a two-down player. He'd play on first and second down, then almost always come off the field in more obvious passing situations. This year, Wilfork is staying on for all situations, with the opportunity to pass rush in addition to his traditional run-stopping role. In Oakland, for example, he played all but one snap.

Here is Wilfork's playing time breakdown through the first six games over the last three seasons (as charted in press box, small margin for error):

Part of Wilfork's increase this year is tied to injuries along the defensive line. Albert Haynesworth missed two games with a nagging back injury, while interior sub rushers Mike Wright and Myron Pryor have landed on injured reserve. Because of that, more was needed out of Wilfork through six games.

The Patriots have Wilfork and Kyle Love as their top interior defensive linemen on the depth chart, with Haynesworth and Gerard Warren next in line. They now have Ron Brace and Brandon Deaderick as possible options, as both practiced for the first time last week after opening the year on the reserve/physically unable to perform list.

With the added depth, Wilfork's playing time could be trimmed a bit from what we've seen over the first six games.

But the days of Wilfork as a two-down player, coming off the field in most every passing situation, clearly seem to be over. His role, perhaps more than any other player on defense, has been altered the most with the team's scheme change.