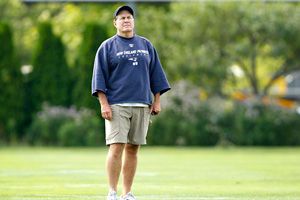 Patriots offensive coordinator Bill O'Brien noted how Belichick gave coaches a "few days off," and said it was much appreciated, affording him the opportunity to see his family -- wife, Colleen, and two sons, Jack and Michael -- particularly given how engrossed coaches typically are during the season.

"[Belichick] did a really good job of giving us a few days off as a staff, that’s always good," said O'Brien. "I always describe it as kind of an Army job -- an Army wife for Colleen, my wife, -- with six months on, six months off. It's good to get back and help her, then get back to work today."

Belichick admitted he used some of his break to do advanced work on the Steelers, but was spotted on the sidelines at Rutgers' game against Louisville on Friday night. He could have passed it off as college scouting, but Belichick said he sneaked in some family time this weekend, which would include seeing his son, Stephen, who is the long-snapper for the Scarlet Knights.

"Tried to get ahead a little bit on Pittsburgh, some of things we're doing, and catch up on a few personal things, do some family stuff that you kinda don't have time for -- or as much time for as the bye week. You can get caught up on those things, a combination of all that."

While players don't report back to the stadium until Tuesday, the coaching staff was back at work on Monday. Most coaches would be OK if the next day off doesn't come until February.