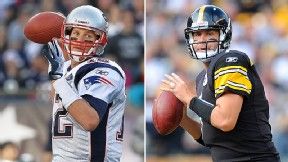 Brady vs. Roethlisberger on Sunday.

In the past 10 seasons, the Pittsburgh Steelers and New England Patriots have consistently been at the top or near the top of the AFC standings. One of these teams has represented the conference in the Super Bowl in seven of those 10 seasons, and they have combined to win five Lombardi trophies.

But the head-to-head rivalry has been mostly one-sided in recent years. New England’s 7-2 record against the Steelers since 1998 is the best of any team versus Pittsburgh in that span. The Patriots will try to improve upon that mark Sunday, when they travel to Heinz Field for a late-afternoon matchup between two of the top teams in the AFC.

Since the the 2001 season, Tom Brady’s first as a starter, the Steelers lead the NFL in scoring defense and total defense. But Brady has had no trouble breaking through the Steel Curtain, with a 6-1 record against Pittsburgh (including playoffs) in his career.

Brady dominated the Steelers last season in the Patriots' 39-26 win at Heinz Field, completing 30 of 43 passes for 350 yards. His Total QBR of 92.7 in that game was the highest posted by any team against the Steelers in the past four seasons.

In that game, Brady picked apart the Steelers' secondary with precise play-action passes. He was 11-of-14 for 161 yards in play-action formations, the highest single-game totals against the Steelers since the start of the 2008 season.

The Steelers rush five or more players on 38 percent of their defensive plays, the ninth-highest rate in the NFL. Their passing defense has excelled when bringing extra pressure, allowing a league-low Total QBR of 19.0.

However, Pittsburgh might want to dial down the blitzing on Sunday with Brady behind center. Brady has shredded opposing secondaries this season when facing five or more rushers, posting a Total QBR of 93.9, which is second in the league behind only Aaron Rodgers.

Mike Wallace is averaging 20.3 yards per catch, fourth-best in the NFL. He has six receptions of 30-plus yards, which is tied with Steve Smith and Calvin Johnson for the most in the league.

Wallace is at his best on the perimeter, with 23 receptions for 444 yards on passes thrown outside the numbers, both of which rank second in the league. The Patriots have allowed the second-most passing yards (1,002) outside the numbers this year, including eight passes of at least 30 yards.

With a win, Brady and Bill Belichick would have the most regular-season wins by a starting quarterback-head coach duo in the Super Bowl era (since 1966). They currently share the record, 116, with the Dolphins’ Dan Marino and Don Shula.