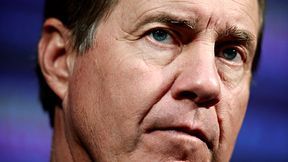 Bill Belichick held a lengthy conference Monday on the heels of Sunday's win over the Jets.A day after topping the rival Jets 37-16 at MetLife Stadium, New England Patriots coach Bill Belichick engaged in a sprawling, 27-minute press conference on Monday. Here's some of the chatter that jumped out:

1. No update on McCourty: Reports indicate that Patriots second-year cornerback Devin McCourty suffered a dislocated right shoulder after being inadvertently hit by rookie Sterling Moore in the first half of Sunday's game. McCourty did not return and, asked if there was any update on his status on Monday, Belichick said simply, "No, not yet."

2. Edelman's grasp on defense: With McCourty's injury, the Patriots experimented with wide receiver Julian Edelman at slot corner near the end of Sunday's game. Belichick admitted the team had simplified its defensive calls with the game in hand by that point, but suggested Edelman knows a good chunk of the defensive playbook. "He's gotta be able to play what we're running," said Belichick. "We're probably not looking to run every singe call in the book at that point -- we're going with only two or three calls at the end of the game, because of the situation. But, he'll know enough -- he does know now. He's a smart kid, he's worked in there before. He would know enough to be able to do whatever it is we asked."

4. High praise for White: Shifting gears to a backup linebacker that did see a lot of field time Sunday night, Belichick was effusive in his praise for linebacker Tracy White as he emerges as more than a special teams standout. "I think Tracy brings a lot to the football team," said Belichick. "He's very professional, he works as hard as anybody, comes in early and stays late, good physical condition. He runs well and he's tough. We've all seen him make a lot of plays in the kicking game... I think he's great for our football team. A great professional, works hard, studies, knows his job, spends a lot of time at it, it's important to him. [He's] totally respect by everyone in the program and does everything right."