FOXBOROUGH, Mass. -- Don't expect the unsportsmanlike conduct penalty that Patriots tight end Rob Gronkowski incurred for spiking the ball near a Jets defender after a touchdown in Sunday's win to detour him from his typically emphatic celebrations.

"No, I'm going to make them bigger," he said with a laugh on Wednesday. "Bring down my spikes? Those weren't even that big." 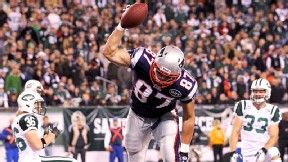 Rob Gronkowski with a big spike after a score Sunday vs. the Jets.After catching a 5-yard touchdown pass with 4:44 remaining in the third quarter on Sunday, Gronkowski spiked the ball near a Jets defender, eliciting a 15-yard penalty. Patriots quarterback Tom Brady admitted that Gronkowski would catch some grief for the penalty, but didn't see much wrong with it.

"I didn’t see it. I mean, he spikes it every time he scores, so I don’t know if that’s flagrant or what," Brady said during his weekly call to Boston sports radio WEEI on Monday. Asked if he spikes the ball after a (rare) rushing touchdown, Brady added: "Yeah, which happens like once every three years. But when Gronk scores -- it was like his eighth touchdown of the year -- he spikes the ball and he deflates the ball. I love that, because I like the deflated ball. But I feel bad for that football, because he puts everything he can into those spikes."

Also on Monday, Belichick hinted that, while he doesn't like any penalty, he might have understood there was no malice intended by Gronkowski.

"Some I think bother you more than others," said Belichick. "All penalties bother me. They bother us, whether it’s 12 guys in the huddle or unsportsmanlike conduct or blocking in the back or whatever other ones we had. We correct those, we point them out, we work on them, we want to prevent them from reoccurring. Believe me, every penalty gets addressed. But [two unsportsmanlike calls on Sunday] were -- there were some circumstances involved in both plays. Was it good? No. Were some circumstances involved? Yes. Can we do a better job? Yes. Hopefully we will."