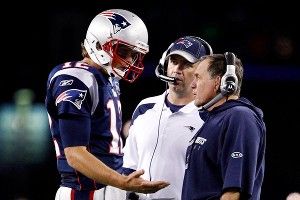 Quarterback Tom Brady, offensive coordinator Bill O'Brien, and coach Bill Belichick.FOXBOROUGH, Mass. -- Patriots coach Bill Belichick offered a glimpse into his role as head coach of the Patriots during Wednesday's press conference, talking at length about how he divides his time and how play-calling is handled among his assistants.

"I know titles are a big important thing externally, but whether you’re President of the United States or graduate assistant, whatever your job is, you do it and then there are people that you work with that do that job," Belichick said when asked if offensive coordinator Bill O'Brien had assumed more of the offensive play-calling duties since being officially elevated to the title of offensive coordinator this season.

"Call [O'Brien] whatever you want to call him, it doesn’t matter. Whoever is calling plays, if the head coach is involved with the play-calling or the organization of the play-calling, then I’m going to talk to the person that calls the plays. If I’m not, then he calls them and you know, there’s no input from the head coach, that’s alright, too. I’m not saying it has to be one way or the other, but however you’re structured to set it up, that’s how it's set up. But the way it’s structured here is, I’ll take responsibility for all the plays that are called. I have the final say on it. If I don’t want to run the play, then I can call it off – that’s my right as a head coach. Any of the bad ones, you can blame me for because ultimately I could change them if I wanted to."

The coaching chatter spawned from Belichick being asked if he becomes more involved with a specific position when there's numerous new faces added to that group.

"What I try to do as a head coach, and it’s one of the advantages, honestly, of being a head coach, is that you can go where you want to go," said Belichick. "If you want to work with this group, you can work with this group; if you want to work with that group, you can work with that group. So that’s kind of nice. But no, the assistant coaches do the coaching, but if there’s anything that I want to try to convey to a particular player or to a particular group, then it doesn’t make a difference whether it’s new guys, old guys, whoever they are. I have no problem going into that meeting room, calling him into my office, talking to [him], sitting down with him and trying to tell them, ‘Look, this is what I think is important this week or this is what I think you need to do better or this is what we’re looking for from you or this is something that’s going to change and here’s what’s going to happen.’

Asked if a hands-on role permeates over to gameday, Belichick offered a glimpse into how play-calling works for New England.

"During a game, I talk to all the play callers, to [special teams coach] Scott [O’Brien] to [offensive coordinator] Billy [O’Brien] to [safeties coach] Matt [Patricia]," said Belichick. "First of all, we go into the game with a plan of how we want to try to start things -- believe it or not. I know everybody doesn’t think that’s the way it is, but we actually talk about, ‘This is how we want to start the game and these are the calls that we would make in this situation, second-and-long, third-and-short, third-and-medium, red area, goal line,’ and then, after the game starts to unfold, then you kind of say ‘OK, well we want to sort of stay with the way we mapped this out, or they’re doing this and these don’t look as good, these look better or maybe we have to make an adjustment and say, ‘Well we can run these plays but if this happens we have to do something else,’ that type of thing. We talk about that over the course of the game."

One question Belichick didn't have an answer for: How many times per game he uses his ultimate authority to overrule a coordinator's call. Pressed on the issue, he quipped: "I don’t know. I’ll log them for you over the next couple of weeks and we’ll see how that goes."