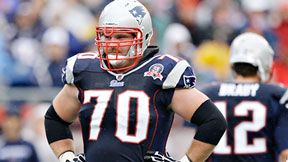 Logan Mankins has been flagged for a team-high four false start penalties this season.FOXBOROUGH, Mass. -- The New England Patriots have been flagged for 15 false start penalties this season, the highest among the team's infractions. Those penalties have contributed to five stalled drives and members of the offense have noted what drive-killers they can be, particularly when incurred while running the no-huddle offense, for an offense that relies so much on tempo.

Patriots left guard Logan Mankins, flagged for a team-high four false start penalties this season, spoke about the frustration of that call on Thursday.

"Those false starts, they are just something that shouldn’t happen, but they have happened," he said. "Hopefully, I could not have any more of those."

He's hardly the only one at fault. A look at New England's false start troubles:

Asked if the false start calls are simply a matter of concentration, Mankins admitted it's on the player to avoid even the tiniest of movement.

"Sometimes you just barely twitch just a tiny little bit and you’re going to get called," said Mankins. "There are so many referees or umpires, whatever you want to call them, watching the O-line now, especially with the other guy moved behind -- there’s two guys just sitting there staring at us. They’re going to catch any little thing."