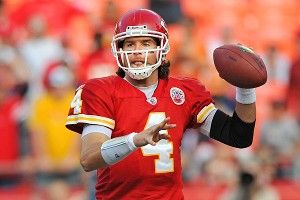 Chiefs QB Tyler Palko makes his first start Monday.FOXBOROUGH, Mass. -- Is the devil you know better than the devil you don't? With old friend Matt Cassel sidelined for Monday's Patriots-Chiefs clash, there's a line of thinking that backup Tyler Palko -- set to make his first NFL start -- is a more dangerous option given his lack of game experience.

Those concerned often point to last season, when Green Bay's Aaron Rodgers sat out and backup Matt Flynn, making his first career start, completed 24 of 37 passes for 251 yards with three touchdowns and an interception. Of course, the Patriots escaped with a 31-27 triumph at Gillette Stadium in part because of Flynn's poor clock management in the waning minutes of the game.

Asked to reflect on that situation, Patriots coach Bill Belichick said this week: "I think Green Bay ran their offense. Again, it was later in the week; it was kind of an iffy situation going into the last couple of days before the game. I’m sure whatever game plan they had in they would have run with whichever quarterback they had, maybe other than a couple of plays or a couple of specific calls.

"I don’t expect a dramatic change in what Kansas City can do. I don’t know what they’ll choose to do, but I don’t see any reason why he can’t do the things that they would need a quarterback to do."

According to the Elias Sports Bureau, Palko would be just the fourth quarterback to make his first career start against a Belichick-coached team. Like Flynn, it didn't work out well for the others:

Palko, signed off the street in 2010, has appeared in only four NFL games, going 9-of-13 for 82 yards while rushing for three times for 13 yards. According to ESPN Stats & Info, he has a Total QBR of 74.1 (a solid number) but in only 19 action plays in the past two seasons.

Belichick and players admitted they'd be digging for game film of Palko this week, but that didn't stop the coach from offering a scouting report.

"I think Tyler is very similar to [Matt] Cassel, except he’s left-handed," Belichick said. "The same type of guy -- a hardworking guy that is smart, that has a lot of confidence -- I think they have a lot of confidence in him. He’s a talented player, he was at Pitt, and that’s the reason why [Joe] Flacco transferred. I think that tells you something about him right there, that he beat Flacco out in that situation. I think that he’s a guy that they’re confident in.

"I think he can run their offense. I think he can do all the things that Matt did. He’s athletic like Matt is. He can pull the ball down and run and run some of their bootlegs and quarterback movement plays and so forth. I would be surprised if they would change too much other than if it’s a left-handed play compared to a right-handed play for a running quarterback or something like that. I’d be surprised if they change too much. They have a good offensive system; they’ve been productive with it. They do quite a few things now, it’s not like they just run a few plays -- they mix things up pretty good. I don’t see any reason why he shouldn’t be able to do that."

As for quarterbacks who made their first career start on "Monday Night Football," Palko will be the second of the 2011 season. (The Colts' Curtis Painter started Week 4 versus the Buccaneers.) Here's a look at all seven quarterbacks to make their first start on Monday night since 1999:

IN THE MNF SPOTLIGHT

A look at quarterbacks to make their first regular-season start on "Monday Night Football" since 1999:

Five other quarterbacks -- four rookies and Painter -- have made their first career starts this season. As ESPN Stats & Info points out, Cam Newton played quite well and Christian Ponder was about average in his first start, but on the whole, these first-time starters have struggled, putting up an average Total QBR of 40.6 in their debuts. Only Andy Dalton got a win: