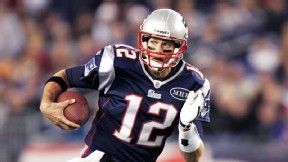 Are the Patriots and quarterback Tom Brady in too much of a rush to score?FOXBOROUGH, Mass. -- There's been a lot of chatter this week about New England's no-huddle offense and the success (and struggles) the team has enjoyed (endured) utilizing the approach during the 2011 season.

One question to ponder: Do the benefits of a fast-break offense aid a team struggling to limit the yardage output of opponents? According to ESPN Stats and Info, the Patriots are averaging a mere 3 minutes, 16 seconds per scoring drive this season -- tied for the fourth-quickest scoring span in the NFL -- but the flip-side is that the team ranks 28th in time of possession (28:33). A look at the numbers:

PUT A RUSH ON IT

A more consistent rushing attack could help balance out some of the Patriots' deficiencies in the time-of-possession battle, which might further decrease the stress put on a defense that's been on the field a lot this season. What's your take? Can the Patriots maintain an up-tempo approach while eating away more of the clock, or is the quick-strike method the best bet for this offense? Sound off in the comments.