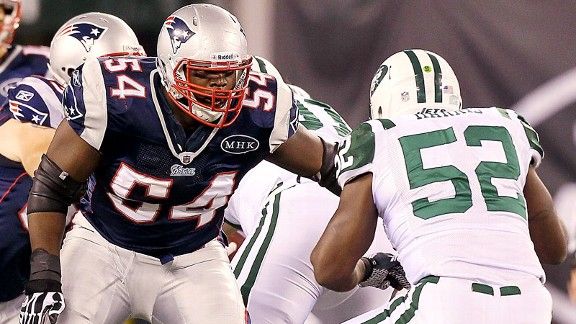 FOXBOROUGH, Mass. – Offensive lineman Brian Waters sought to make one thing clear from the start of his media interview Friday morning: While he spent 11 seasons with the Kansas City Chiefs, he doesn’t view Monday night’s game against his former team as any type of revenge scenario.

“I have a great amount of affection for those guys over there personally,” said Waters, who from 2000-2010 was a KC stalwart on the field and in the community.

At the same time, Waters acknowledged that he’s likely to have some “feelings” that wouldn’t be there other weeks.

“It’s not one of those things where there is anger,” he said. “I have great respect for those guys. I love a lot of those guys personally. But I’m a Patriot now, and I’m here to try to win football games and be a productive part of this football team. That’s something I take pride in. I always try to take pride in the job I do, and this week is no different.”

Waters was asked to revisit how his time in Kansas City ended.

“I think it ended well. I think it ended the way it was supposed to,” he answered. “Honestly, it was a mutual decision between both parties and I think both parties are happy. I know I’m excited about where I am and how I’m playing and the guys I’m playing with. I think they’re excited about the guys they have in my place, those young offensive linemen who are now really starting to grow into and turn into the guys I knew they already were. I think it’s ended up well.”

Earlier on Friday, Waters was praised by coach Bill Belichick, who reflected on signing the perennial Pro Bowler after training camp. Belichick acknowledged there was some surprise that a player of Waters’ caliber was available, which was likely because of the lockout.

Waters has started all nine games this season at right guard – he was the left guard in Kansas City – and has been one of the team’s best blockers.

“Brian has done a great job for us. He’s been a real good addition to our football team in so many ways,” Belichick said. “I couldn’t say enough positive things about him, what he’s brought here.”

Showing he was a quick study to the Patriots’ media rules, Waters was asked about missing six plays in Sunday’s win over the Jets before returning, and how he’s now listed with a knee injury.