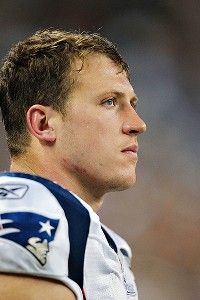 FOXBOROUGH, Mass. -- Most Patriots players were excited to be wrapping up work earlier than normal Thursday (around 2 p.m.), and looking forward to celebrating Thanksgiving.

Rookie offensive tackle Nate Solder, the team's first-round pick, was hosting some of his fellow rookies along with his girlfriend. Quarterback Ryan Mallett and running backs Shane Vereen and Stevan Ridley are expected guests.

Solder, who kept it simple when asked his favorite item on the Thanksgiving menu (turkey and potatoes), said it was important to him that none of the rookies were alone on the holiday. Cornerback Ras-I Dowling was also hosting some of the rookies.

Meanwhile, just as kicker Stephen Gostkowski, punter Zoltan Mesko and snapper Danny Aiken spend most of their time together at Gillette Stadium, they're doing the same today. Gostkowski's family is hosting, and a "league source" indicated that his father is in town to cook the turkey.

"It's thoughtful of Steve to open his house," said Aiken, the rookie from Virginia.

No truth to the rumor that Mesko was planning on bringing his Thanksgiving favorite -- a can of cranberry sauce.

"A lot of eating in store for me," said Slater, whose Thanksgiving favorite is sweet potato casserole. 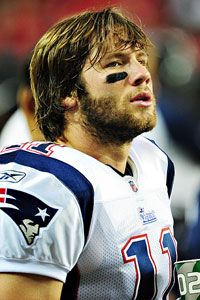 Receiver/defensive back/returner Julian Edelman, who said his mother's bread cabbage is his Thanksgiving favorite, was also planning on being at the Woodheads.

Meanwhile, offensive lineman Sebastian Vollmer was joining some of his linemen at Logan Mankins' home. Growing up in Germany, Vollmer has come to appreciate the Thanksgiving holiday in the U.S. over the last seven years.

"There's a lot of food and it's nice to think of all the things you're thankful for. I'm in a position where there is a lot to be thankful for," he said.

For veteran defensive end Andre Carter, the plan was to spend the rest of the day at home with his wife Bethany and their children. His son, Quincy, had the game-plan set this morning.

"He just turned four yesterday and he likes playing with Legos," Carter relayed. "We have 'Imagination Land', where he can be anything, and I have to do my part as daddy."

Like Carter, veteran offensive lineman Brian Waters was planning to spend the day with family. His favorite on the menu -- stuffing.

Meanwhile, tight end Rob Gronkowski will be with his brother, Dan, the former Patriots tight end who is still in town.

"Stuffing, turkey and gravy, but it all has to be mixed together," he said when asked what would be the favorite thing on his plate in a few hours.

Cornerback Antwaun Molden was heading over to Sergio Brown's residence, defensive end Mark Anderson's girlfriend was cooking up a feast at home, while defensive lineman Brandon Deaderick (favorite -- macaroni and cheese) and cornerback Phillip Adams have family in town.

"Can't eat too much or I'll come in slow tomorrow," joked the soft-spoken Adams.

For players like tight end Aaron Hernandez and Niko Koutouvides, who are both from Connecticut, the early end to the workday gave them a chance to join their families' regular festivities. Koutouvides was running out of the locker room to make the two-plus hour drive back to Avon so he could spend the day with his kids (2 1/2 and 8 months).

As for Bill Belichick, he said there was still some work to be done today so coaches can be prepared for when players return tomorrow. But if things go according to plan, all coaches would have some time tonight to enjoy Thanksgiving.

Belichick's favorite on the menu?

"I think it would have to be dessert, pumpkin or pecan pie," he said, smiling.