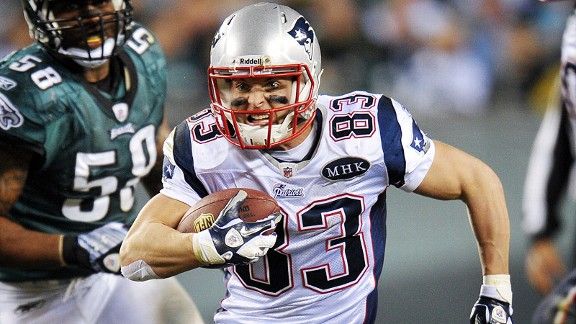 Patriots wide receiver Wes Welker's eyes light up when they see space.PHILADELPHIA -- A Patriots offense that had struggled to generate big plays in recent weeks generated two home runs through the air in the first half Sunday against the Eagles with a 63-yard catch by Deion Branch and a 41-yard touchdown grab by Wes Welker.

After spotting the Eagles a 10-point lead while its defense allowed some big gains through the air, New England rallied back (and ahead) by returning the favor. Branch's reception off an improvised scramble route set up a 1-yard touchdown run by BenJarvus Green-Ellis to put New England 14-10 early in the second quarter. Six minutes later, Welker got behind the defense to aid New England in racing away.

To watch the video highlights, hop HERE for NFL.com replays. Let's put the plays under the microscope:

The Patriots were facing 3rd and 13 at their own 36 when Philadelphia defensive end Trent Cole went wide around left tackle Matt Light and nearly got to Brady. Instead, with Logan Mankins and the rest of the line holding up their blocks, Brady was able to shuffle to his left while allowing more time for his receivers to get open. Outside of the pocket, Brady started directing traffic and motioned for Branch to break off his comeback route and go deep down the left sideline. Brady then zipped the ball past a sprawling Asante Samuel and Branch caught it with room to run. The receiver cut back inside on a pair of Eagles defenders with about 15 yards to go, but was brought down at the 1 as he tried to bulldoze his way in. BenJarvus Green-Ellis barreled over right tackle on the next play to put the Patriots on top, 14-10.

"He had a comeback route, he ran it, and I scrambled up," said Brady. "[Branch] kind of stepped up, wheeled inside and [Samuel] lost him. I just tried to jam it in there to him. He caught it and he did the rest. I thought he had a great cutback there at about the 15- or 20-yard line to get us down to the 1. That was a huge play in the game. I thought, really, it stopped the momentum that they had established and for us to make plays like that really softens up the defense."

Said Branch: "Our front line did a great job on that play blocking for Tom. It wasn't a play that I made. It was a play that he made with his feet. Tom doesn't get a lot of credit for keeping his head up, getting out of the pocket, and making plays. That's what he did. The easy part is what we do on the outside -- staying open with our scramble rules. But all the credit goes to the front line and Tom."

Branch talked a bit about those scramble rules for the receivers.

"We have scramble rules and, trust me, when [Brady is] scrambling, everybody wants the ball," he said. "You can look around and see all the guys doing what they’re supposed to be doing. Fortunately, he was locked in on me on that one play."

Welker suggested the Patriots had run this play -- or a variation of it -- earlier in the game and he felt like the safety bit hard on the play-action fake, so he alerted Brady to look for to fake an in-cut and streak down the seam. Sure enough, both slot corner Joselio Hanson and safety Nate Allen got sucked up towards the line when Brady faked the handoff to running back Danny Woodhead. Welker makes the play, however, with a lightning quick in-cut fake that left Allen again creeping up to jump the route. Instead, Welker turned on the jets while racing over the top of the defense and Brady put enough air under the ball -- no small feat considering his struggles there in recent weeks -- allowing Welker to haul in an easy touchdown grab.

"He said before the play that, 'If I get this certain look, then I'm going to fake like I'm running the in-cut and then run the post.' He did it and came to the sideline and said, 'I told you, I told you!' So that was pretty funny," siad Brady. "It's nice when they work out kind of like you talk about it. Wes [Welker] is so consistent and reliable, he's a phenomenal player."

Said Welker: "We ran the same play early on and the safety came down pretty yard, so I told [Brady] in the huddle that, if I see this coverage, I’m going to step in and go. He was fine with it. Luckily, we got the coverage and were able to get a touchdown."