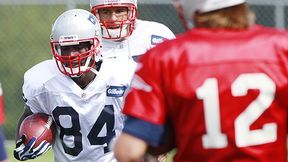 Tom Brady and Deion Branch have developed quite a bond over time.A handful of leftovers after Patriots coach Bill Belichick addressed the media Monday at Gillette Stadium, one day after his team's 38-20 triumph over the Eagles:

1. Brady and Branch's relationship: In an offense where Wes Welker and young tight ends Rob Gronkowski and Aaron Hernandez claim much of the spotlight, Deion Branch has blended in with the scenery a bit in recent weeks. That changed Sunday when he caught six passes for 125 yards, including a momentum-changing, improvised 63-yard grab in the first half to set up the go-ahead score. Asked about the quarterback-receiver bond between those two players, Belichick noted: "Deion is a very instinctive receiver. He has a great sense of timing, of when the quarterback is ready to throw the ball, when he needs to be open, how to get open. Tom, from his position, kind of has that same sense of what the receiver would expect him to do and what he should do in certain situations and that’s almost always what Deion would do. Again, we certainly have rules and kind of guidelines for all players and all situations, but inevitably things come up that either go against the grain or it’s not quite the way we’ve talked about it and the player has to make a decision. I would say those guys almost always do what -- if you had gone over it -- what you would have wanted them to do."

2. Branching out: Keeping the focus on Branch, Belichick noted his great leadership qualities and how the veteran wide out always has a smile on his face. When a reporter mentioned the contract squabble that sent Branch out of town, Belichick was quick to note, "I’ve never had a problem with Deion on the field. I’ve never had a football-related problem with Deion. He’s always been great to coach. Contracts are contracts, but when it was about football, as a player-coach relationship, it’s always been good with him. Never had a problem."

3. Viewing options: House Party over Price is Right: Asked about second-year wide receiver Taylor Price earning a DNP in Sunday's win, while Tiquan Underwood and Julian Edelman played ahead of him, Belichick said: "What went into it was Tiquan played more than Taylor did." Pressed on what's keeping Price off the field, Belichick added: "Maybe it will be that way this week, maybe it won’t. It [wasn’t] that way the week before, so we’ll take it week-to-week."

4. Picking up Underwood after a dropped pass: Given the opportunity to offer his thoughts on a first-half drop by Underwood, Belichick made sure not to throw the young receiver under the bus. "It would have been a tough play," he said. "It could have been a little better executed all the way around. I thought he ran a good route. The ball was a little inside. [He] couldn’t quite get it. Maybe he could have had it; I don’t know. Could have been thrown better, probably could have been caught, but we’ll keep working on it and hopefully get it the next time."

5. Belichick plays through pain: Whether it's an oncoming cold or just an ill-timed tickle, Belichick couldn't get rid of a cough during the afternoon conference. He even paused at one point as media relations czar Stacey James handed him some water to try to clear his throat. It didn't work, but, like many of his players, Belichick grinded through the session.