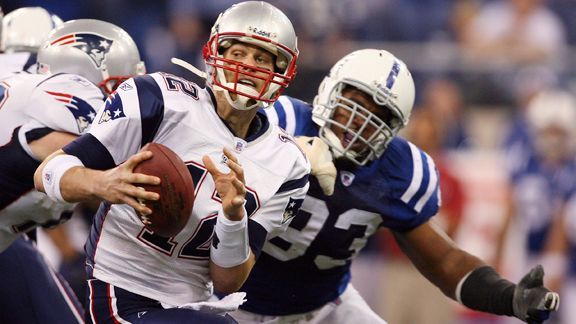 Patriots quarterback Tom Brady knows the impact Dwight Freeney can have on a game.FOXBOROUGH, Mass. -- Patriots quarterback Tom Brady wouldn't take the bait when asked if he would have preferred that his friend Peyton Manning was playing this week (Brady simply said he hopes Manning makes the trip so he can say hello). But Brady sprinkled in some humor when the topic shifted to the players the Colts will have available.

"I wish [defensive end Dwight Freeney] was out this week," joked Brady. "He’s in there again. He’s a phenomenal player. If I could be a defensive end, I'd be like him. And Robert Mathis on the other side, both of those guys can really wreak havoc [especially with] strip sacks. Coach [Bill Belichick] said this morning that I think Freeney's got like [99.5] career sacks and [42] forced fumbles. So almost half the time he sacks you, he strips the ball from you. He’s a great player."

Freeney owns three sacks against Brady in seven career regular-season games against the Patriots and got him once last November. Brady said it's players like Freeney that make this week a dangerous game, regardless of the fact that the Colts are winless.

"Sometimes we take for granted winning here because we’ve done that," said Brady. "It’s hard to win an NFL game. Every team has talent. Every team can only spend to the cap, you can’t spend over it. The draft and the way that’s built. It’s hard to win games, it really is. You never want to see a team have that kind of a season, because you know how miserable [the Patriots] are when we lose two in a row. At the same time, it's our job is to go out there and perform as well as we can against them this week. That’s what we plan to do. We don’t take anything for granted. The record? When the ball kicks off, it doesn’t matter what their record is. It doesn't matter what our record is. The team that’s going to win is the team that plays the best that day."

Pressed on why it's so hard for observers to buy into that "records don't matter" philosophy that Belichick is adamant about instilling in his players this week, Brady again laughed.

"Because you guys don’t play," he said. "You don’t have to drop back and try to find the open guy with two guys breathing down your throat. You don’t have to cover Austin Collie and Pierre Garcon and Reggie Wayne and Dallas Clark. Or tackle those guys. They’re damn good football players. And they’ve proven that year after year against us. So I've got a ton of respect for the Colts and the way they play. Someone said it earlier, we've had some great games against them. So we go out and expect to get their best. Their best has been very, very close at times this year. They played Pittsburgh very well, so when you see them play a team like Pittsburgh well -- and actually play them better than we played them -- you understand that they can certainly beat us if we don’t go out and play well."