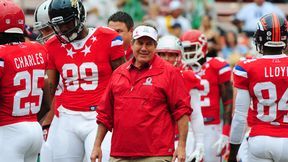 Patriots coach Bill Belichick on the sideline at the Pro Bowl.

A look at the Patriots that are currently ranked in the top 5 among AFC balloting:

Fan voting (hop HERE to cast your ballot) runs through Monday, Dec. 19. The AFC and NFC All-Star squads are based on the consensus votes of fans, players and coaches. Each group’s vote counts one-third toward determining the 43-man rosters for each conference. NFL players and coaches will cast their votes on Dec. 21-22. The 2012 Pro Bowl will be played on Sunday, Jan. 29 (NBC, 7 p.m.) from Aloha Stadium in Honolulu.