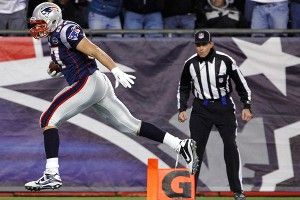 A familiar sight with Rob Gronkowski.FOXBOROUGH, Mass. -- With his second touchdown catch of the game Sunday against the Colts, the Patriots' Rob Gronkowski tied the NFL for touchdown receptions for tight ends with 13.

This is Gronkowski's third two-touchdown game in his last four games and he has eight touchdowns in the past five outings.

Gronkowski nearly established the NFL record late in the third quarter when he caught a lateral from Tom Brady on a 2-yard touchdown. The play was initially scored a touchdown pass, but later changed to a run.