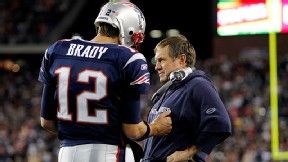 Tom Brady and Bill Belichick chat.Patriots coach Bill Belichick and quarterback Tom Brady were wired for sound in Sunday's game against the Colts and the NFL Network will offer a glimpse into their conversations during its Sound FX series (Wednesday, 9:30 p.m.)

Here's the blurb on this week's show from the network: