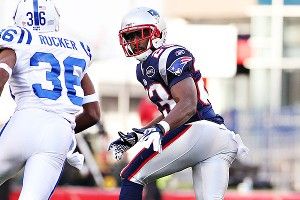 Nate Jones didn't have any trouble jumping back into action Sunday vs. the Colts.FOXBOROUGH, Mass. -- Playing 69 snaps four days after being signed off the street? No problem for veteran defensive back Nate Jones. Remembering about 69 names on his new team? Decidedly more difficult.

Despite playing just one defensive snap this season while appearing in two games for the Miami Dolphins, Jones played all but four defensive snaps for the New England Patriots during Sunday's win over the Colts (and he appeared on two special teams units).

That's a hefty workload for a player out of work for nearly two months.

Asked about the challenges of joining a new team in Week 13, Jones laughed Wednesday while noting, "Simple things, like learning all the guys' names... being on time to everything, knowing where I have to be. These are all the things that come with coming to a new place. You just take it one step at a time."

Jones said he found a residence close to the stadium and has some teammates on speed dial to ensure he's in all the right places at the right time. That's exactly where he was when the team called on him Sunday as he responded with nine tackles and a pass defended against the Colts.

"We just prepare for the game in a certain direction, but you never know how it’s going to go," said Jones. "It went in a direction where I ended up being out there a lot."

A veteran of eight NFL seasons, Jones talked about a desire to help the young players on the team. He said a week of experience has already made him feel more comfortable.

"A week under the belt, it's a big difference," said Jones, who noted he never worried his phone wouldn't ring again.

"No, in the NFL you can get signed at any time," he said. "I kept working like it would happen any day. You have to be ready."

And Jones proved Sunday that he was.