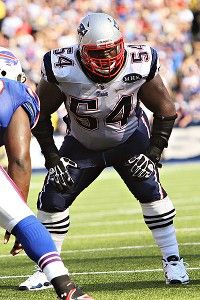 FOXBOROUGH, Mass. -- In 11 seasons with the Kansas City Chiefs, Brian Waters never tasted playoff victory. And while the Patriots have had their own playoff struggles in recent seasons, Waters can sense a difference in the confidence as he prepares for his first playoff game with New England.

"I wouldn’t say [preparations have been any] different, just the fact that everybody knows how it’s do or die in the playoffs," said Waters. "I think it’s different in the fact that the whole organization has a great sense of what it takes to get it done. That’s something that, here, you feel very comfortable in that the plan is a plan that's been executed before. You just gotta fall in line and follow suit."

Waters and the Chiefs lost a pair of AFC Wild Card games (2006 vs. Colts and 2010 vs. Ravens), but maybe most disappointing to him was a first-game exit after a 13-3 campaign in 2003 in which the second-seeded Chiefs were ousted by the Colts, 38-31, in the Divisional round.

Waters knows the Patriots haven't accomplished anything with their own 13-3 season and top seeding.

"I'm proud to be a part of it, but it really only becomes special if you take full advantage of it," he said. "If you’re able to accomplish even more. I’ve been at this round before, so I’d like to go a little bit further. That’s going to be a tough task and we’re going to have to make sure we’re putting everything into it, as far as preparation and being ready to go on Saturday night."

A few more highlights from Waters' 10-minute Q&A with reporters on Wednesday:

* On offensive line coach Dante Scarnecchia: "He’s definitely not shy; He loves to work. He’s very animated about being on the details. As an offensive lineman, he’s definitely not going to give you a break. But you respect him, because he’s not doing it to hear his own voice. He’s doing it because he believes the things that he’s teaching and the techniques he’s teaching -- they work. And it’s evident by, not only the play of this line this year, but over the course of the years that the Patriots have always had very good offensive lines. So, it definitely works."

* On blending in after joining the Patriots right before the season started: "It took me a little while. I was [in Kansas City] for a long period of time. Most of the guys here, they let me be very comfortable, they helped me get acclimated to the situation, the playbook, the environment. It was an easy transition, but it took me a little while to get used to the routine and also get used to the playbook as well."

* Reflecting on the regular-season meeting with the Broncos: "They did some things early on that we weren’t as prepared for as we thought we were. It took us a minute to just understand what they were trying to do for that day. Then we caught up to what they were trying to accomplish and we went from there. That’s one of the great things about our [in-game] adjustments -- the fact that you never really know what a team is going to do until you actually get out there. Once we got out there and got a feel for what their game plan was, we caught up to it, and started producing more."

* On if he's surprised to see the Broncos again: "Not really. It’s evident that [the AFC West] was pretty wide open. All of those [teams] had played well, in that [division], every last one of those teams had beaten a lot of big-named teams over the course of the season. So it didn’t surprise me at all. The formula which they played with, over the last -- I don’t know when they really started their best -- but if you say over the last 10-12 games, they’ve been pretty productive, and working with the formula they worked with."