HOUSTON -- When there weren’t as many flecks of gray in Dwight Freeney's beard, and Tom Brady was just making the turn into his 30s, one of the highest compliments was paid by the New England Patriots quarterback.

The year was 2009 and Brady was asked the most intimidating defensive player to him in the NFL.

Brady explained how every play with Freeney had the potential to be a game-changer based on his relentless pass-rushing style, especially from the blindside. That was something that stood out to him every time the Patriots and Freeney's Colts would play from 2002-2012. 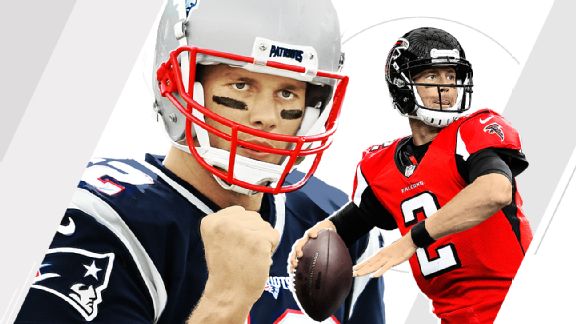 Freeney had a good laugh when Brady’s old thoughts were relayed to him on Thursday morning.

"It got to the point where it was like they were in our division. We knew them. They knew us. It definitely brings up all these emotions of how it used to be in a sense," Freeney told ESPN.com. "Obviously, I’ve seen him a lot more than anyone else on this team, so it will be special going back out there and playing against him one more time."

Freeney, 36, has essentially been a designated pass-rusher for the Atlanta Falcons this season (3 sacks), although he started in the NFC Championship Game. He should see plenty of action Sunday in Super Bowl LI, and if he’s harassing Brady like the old days, it will be good news for the Falcons.

There is also another subplot to this reunion story, as Freeney seriously considered becoming Brady’s teammate four years ago when he was a free agent, going as far as to take a visit to the team’s home facility at Gillette Stadium.

"I was behind enemy doors!" the personable Freeney said with a laugh. "But, really, that was a great experience. Those are great guys, man. I have so much respect for what they do over there, and a lot of friends on the staff. And, of course, Bill [Belichick], who I’ve known from Pro Bowls and all those games."

Freeney said one of his main connections to the Patriots' coaching staff was Matt Patricia, the current defensive coordinator who was just starting out as a graduate assistant at Syracuse in Freeney’s final season there.

Given the intensity of the Patriots-Colts rivalry, Freeney's free-agent visit sparked passionate reaction in some corners, with Freeney's own mother expressing concern about the possibility of Freeney swapping out a Colts’ horseshoe for a Patriots "Flying Elvis" logo.

"It felt weird, I’m not going to lie," Freeney acknowledged.

Could Freeney have really envisioned himself in a Patriots uniform?

As it turned out, the sides never discussed contract parameters, which adds context to how far things proceeded. Freeney ultimately signed with the Chargers, where he spent the 2013 and 2014 seasons. He played for Arizona in 2015.

Now he’s with the Falcons, hoping to take down Brady and the Patriots one final time.