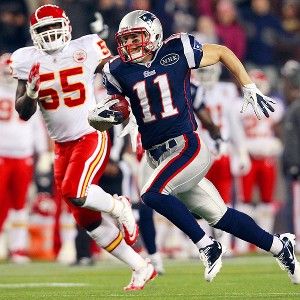 Julian Edelman breaks free on a punt return for a touchdown vs. KC.

FOXBOROUGH, Mass. -- Patriots utility man Julian Edelman busted open Monday night's 34-3 triumph over the Chiefs with a 72-yard punt return for a touchdown early in the third quarter. It was Edelman's second career punt return for a touchdown -- he set a franchise record with a 94-yard return in the 2010 regular-season finale against the Dolphins -- making him just the fourth player in team history to return multiple punts for scores (former jack-of-all-trades Troy Brown holds the team record with three; Irving Fryar and Michael Haynes had two apiece).

But how exactly did he do it on Monday night? Let's put his big return under the microscope. Hop HERE to watch the video on NFL.com for context.

Ironically, the play starts with a different sort of breakdown -- Kansas City gunner Jalil Brown gets around New England corner Antwaun Molden and has a free run at Edelman as he catches the ball at his own 28. We'll let Molden explain from there.

"What happened was I lost contain and inside leverage," he admitted. "I saw Jalil, he squeezed too tight and Julian made a good read. He came back outside and busted it out. I turned around to get another block for him, and he cut it back and he saw daylight. It was good a play [by Edelman], a good read and a good run."

With Edelman causing Brown to miss, Molden made a nice hard block on Reshard Langford to allow Edelman to get outside the hash marks. Matthew Slater and Niko Koutouvides chipped in a couple blocks to allow Edelman to turn the corner. From there it's two final key blocks: Ross Ventrone clears a lane by holding up Kansas City's Jeremy Horne while Jermaine Cunningham gets just enough of Cameron Sheffield to allow Edelman to burst into the clear.

Said Edelman: "We held the gunners and our internal guys did a good job blocking their players. As a punt returner, you have to make someone miss and then get back to your return side so we executed the play really well.”

The punt return put the Patriots up 24-3 early in the third quarter -- their second score in little more than a minute -- and broke open what had been a close game through the intermission.

One last note courtesy of the Patriots: Edelman now boasts the highest punt return average in Patriots history, having returned 44 punts for 603 yards (13.7 yards per return). And it's not even close...