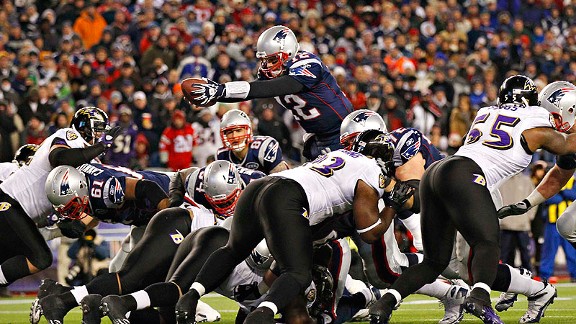 Tom Brady’s rushing touchdown was his first in a playoff game since the 2004 season.The New England Patriots are headed back to the Super Bowl after a thrilling come-from-behind win over the Baltimore Ravens that wasn't decided until the final seconds. Here's a closer look at how the game played out:

How the Patriots Won

The Patriots won despite statistical indicators that they wouldn’t.

Teams with at least three turnovers had lost their last 22 playoff games prior to Sunday. The last team to win before Sunday was the Patriots in the 2007 AFC Championship Game against the Chargers.

Tom Brady's streak of 18 consecutive postseason games with a passing touchdown (second-longest in NFL history) came to an end. This was only the fifth game of Brady’s career in which he didn’t throw for a touchdown, and had at least two interceptions.

Brady did rush for a score, the third of his postseason career and first since the 2004 Divisional round vs the Indianapolis Colts.

The Patriots won on offense by grinding out long drives. All five of their scores in this game came on drives of at least 10 plays. Those were the only five drives of the game in which they ran more than three plays.

Beyond that, a big part of the Patriots’ victory was the ability of their defense to contain Ravens running back Ray Rice.

Rice gained 78 yards from scrimmage, his second-lowest total of the season. Rice was the second-most prolific rusher inside the tackles this season, but the Patriots held Rice to only 45 yards inside the tackles, and just 2.8 yards per carry.

The Ravens were done in by a failed fourth-down attempt with under three minutes left and a missed field goal attempt from 32 yards by Billy Cundiff.

Head coach John Harbaugh passed on a 51-yard field goal attempt from Cundiff, who was 1-for-6 on attempts of at least 50 yards this season, and 5-for-19 for his career.

Cundiff then missed the 32-yard kick with 11 seconds left. He was 28-for-37 on his field goal attempts during the regular season. His 76 percent success rate was fourth-worst among the 31 kickers who attempted at least 20 field goal tries this season.

According to the Elias Sports Bureau, it was the third-shortest missed field goal attempt in the final 30 seconds of regulation (or any point in overtime) of a postseason game in which the field goal could tie the game or put the team ahead.

The two shorter misses-- a 27-yarder by Rolf Benirschke (1981 San Diego Chargers). and a 23 yard kick by Mark Moseley (1986 Cleveland Browns) -- both came in overtime in games in which their teams won anyway.

Stats of the Game

Teams that were -2 or worse in turnover differential (as the Patriots were) are 3-46 all-time in conference championship games (since 1970). The other two winners were the the 1975 Pittsburgh Steelers and 1981 San Francisco 49ers.

Three things to know on the Patriots heading to the Super Bowl:

1. The Patriots advance to their seventh Super Bowl. Only the Steelers and Cowboys (eight apiece) have been to more.

2. Tom Brady will be going to his fifth Super Bowl where he'll tie John Elway for the most by a starting quarterback.

3. The Brady-Bill Belichick duo will be going to their 5th Super Bowl, more than any other QB-head coach combination in history.