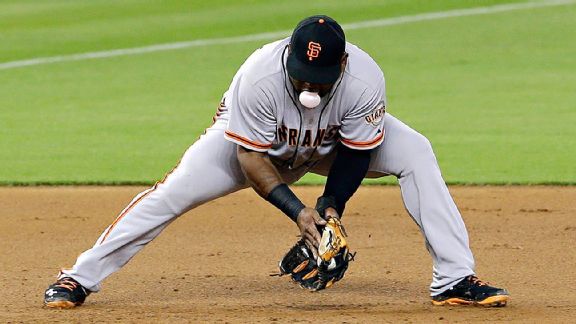 Pablo Sandoval is adept enough to blow bubbles and field ground balls at the same time.Disregard the girth when it comes to making judgments about Pablo Sandoval’s defense.

Sandoval may match up size-wise with David Ortiz, but he’s shown himself to be more than capable of playing a creditable third base.

Presuming Sandoval isn’t out of shape heading into spring training, you’ll notice a definite difference between how he mans the position compared to Will Middlebrooks (-13 Defensive Runs Saved in 154 games at third base over the last two seasons).

"He came into spring training in better condition and that brings out his athleticism,” said Giants bench coach Ron Wotus when we talked to him at length about Sandoval in July. “Pablo is someone who has always worked extremely hard on his defense and he pays a lot of attention to detail. He's very athletic for his body type. He's always had the skills.”

In 2011, Sandoval ranked second among third basemen in the majors and first in the NL with 15 defensive runs saved. But his total slipped to minus-5 defensive runs saved in each of the past two seasons, with added pounds perhaps playing a role. We’re guessing there was some personal motivation to do better in 2014, and he did.

What does Sandoval do that makes him good? Simply put, he covers his ground well and gets to balls that others don’t.

Sandoval ranked second among third basemen with 50 “Out of Zone” plays in 2014, trailing only Kyle Seager (who won the Gold Glove award and coincidentally agreed to a seven-year contract with the Mariners on Monday). “Out of Zone” plays are outs gotten on balls hit into areas in which a third baseman nets outs less than half the time.

Baseball Info Solutions does video review of every play of every game, categorizing plays into 30 groups of good fielding plays (GFPs) and about 60 categories of defensive misplays and errors, providing the data to teams and media.

Good fielding plays for third basemen include things such as an outstanding diving stop that merits a Web Gem, starting a double play quickly or cutting off a ball hit down the line to yield only a single instead of a double.

Sandoval finished 2014 with 60 Good Fielding Plays and 30 Defensive Misplays & Errors. His Good Play/Misplay ratio of 2-to-1 was second-best in the majors, trailing only Josh Harrison of the Pirates.

The average third baseman has a ratio only slightly better than 1-to-1.

Watch a little bit of the Sandoval highlight reel and the thing that jumps out is his reflexes. We're taking an educated guess here, but we'd wager that if someone kept track of the rate of a player's successful dives for balls to diving attempts made, Sandoval would be at the top of the list.

"His hand-eye coordination is off the charts," "Baseball Tonight" analyst Alex Cora said earlier this year. "You can see that in how he hits balls over his head and balls in the dirt. His best tool on defense is that hand-eye coordination because there's not a lot of time to read the angles of the ball coming off the bat at third base."

Sandoval ranked tied for second among all players for Good Fielding Plays awarded for ground-ball outs on diving stops and charges on slow rollers with 36. He’s also cut back on throw-related misplays and errors from 13 last season to only eight in 2014.

Wotus noted that one advantage Sandoval had with the Giants is that he knows the tendencies of his pitchers, since the likes of Tim Lincecum, Matt Cain, Madison Bumgarner and Ryan Vogelsong were with the team for a while. The Giants ranked second in the majors in turning ground balls into outs (76 percent of the time) and that could be part of the reason.

"When the Braves had their run [with Tom Glavine, Greg Maddux and John Smoltz], they had the same pitchers going every night, and all their fielders seemed to know exactly where to be," Wotus said in July.

But the new guys also have learned that Sandoval performs better than he looks.

"I've been very impressed with him," Giants starter Tim Hudson told ESPN’s Jerry Crasnick. "Because he's a bigger guy, you don't think he's very athletic by looking at him. But he's pretty agile. He'll get to balls in the hole and some balls down the line. He runs in on the ball pretty well too. I've been pleasantly surprised with his range and how nimble he is at third."

If he continues to perform this way, Red Sox fans will be as well.