As the wins piled up last season -- 11 at the All-Star break, 20 by the second week of September, 22 in all -- Rick Porcello recognized he was pitching better than ever.

But he also must have felt like a luckier man than even Kate Upton's fiancé.

For one thing, the supercharged Boston Red Sox offense revved even hotter for Porcello, averaging 6.83 runs in his 33 starts compared to its overall majors-leading 5.42 runs per game average. For another, opponents batted .269 on balls in play against Porcello, well below the approximate league average of .300 and confirmation of the superb defense being played behind him. 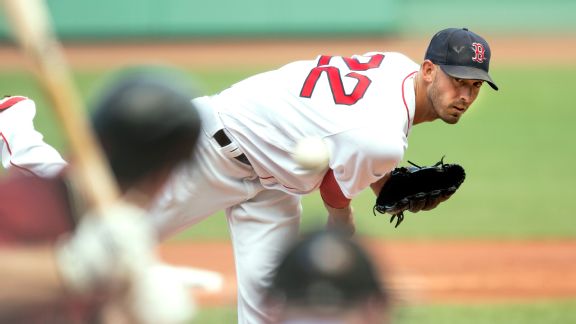 How many wins will Rick Porcello pick up in 2017? Vote at the bottom of the page »

Indeed, for as loudly as Upton cursed her objection when Porcello edged her beau, Detroit Tigers ace Justin Verlander, in the Cy Young Award voting, she surely would acknowledge the role that good fortune played in Porcello going 22-3 and becoming the winningest Red Sox pitcher since Pedro Martinez went 23-4 in 1999.

"It's hard to win one game in the big leagues, let alone 20. I'm very proud of that," Porcello said. "At the same time, it's collective. We had to swing the bats and play defense. It’s a complete team effort. There are a lot of variables."

And almost as many reasons to wonder whether the 28-year-old right-hander can repeat his success.

To be fair, Porcello pitched really well last season. He reached at least the seventh inning in 23 of his 33 starts and never got knocked out of a game before the fifth. He allowed three earned runs or fewer 27 times and ranked fifth in the American League with a 3.15 ERA. Nine of his victories followed a Red Sox loss.

In short, Porcello provided the consistency the Sox didn't get from $217 million ace David Price. And other than maybe former general manager Ben Cherington, who could have foreseen that?

Porcello's success didn't exactly come out of nowhere. A former first-round pick of the Tigers, he broke into the majors at age 20 and had 76 wins in 180 starts by age 25.

But Porcello rarely rose above the level of a mid-rotation starter through his first half-dozen seasons, and his first year with the Red Sox was a train wreck. After being acquired in a December 2014 trade for outfielder Yoenis Cespedes (who had come to Boston six months earlier in a deal for ace Jon Lester) -- and signing a four-year, $82.5 million extension before throwing a pitch -- Porcello went 9-15 with a 4.92 ERA that was even uglier before a triceps strain and a head-clearing Triple-A rehab assignment.

Porcello's most common explanation for last season's breakthrough is that he better understands what makes him effective. In 2015, he strayed from his signature sinker in an attempt to strike out more hitters with his relatively ordinary four-seam fastball. Last year, he got back to throwing the ant-killing sinker that induces so many weak ground balls.

But Porcello owes his success as much to his slider and changeup, both of which he threw more often and with much better results last season. According to ESPN Stats & Information, opponents batted .190 against the slider, down from .333 in 2015. Porcello recorded a career-high 103 outs with his changeup, against which opponents batted .174, compared to .304 in 2015.

Sorry Rick but you didn't get any 1st place votes? you didn't win. #ByeFelicia @MLB keep up with the times and fire those writers

Cherington always believed Porcello's pitch mix was diverse enough to someday make him a top of the rotation starter. It just didn't happen until after Cherington stepped down.

The question now is whether 2016 will represent the fulfillment of Porcello's potential or an outlier in a good, not great career.

"It's one of those things that he pitched in the big leagues, and he won 14 games his rookie year at a young age, but he was not fully developed with his repertoire at that point," said Red Sox president Dave Dombrowski, who drafted Porcello for Detroit but also traded him to Boston. "He needed to add some off-speed stuff. He really won with his sinker [previously]. He had to learn how to pitch at the big league level, which isn't easy. And he won some games but sometimes wasn't quite ready to take that next step.

“Maybe as a youngster, probably even when he signed the contract with the Red Sox, he tried to do too much. He tried to be better at times. We all want to be better. He’ll work to be better in that he’ll always try to fine-tune his pitching, but I don’t think he’ll try to do too much anymore. He knows what makes him successful at this point.”

Porcello claims his life hasn't changed since he joined the exclusive club of Cy Young winners. But after years of following Verlander and Max Scherzer in Detroit, he is positioned with well-established aces Price and Chris Sale as a leader of the Red Sox's pitching staff, a role he embraces.

"My expectations have always remained consistent, regardless of what season I’ve had prior to that," Porcello said. "I’m thinking about the same sort of things going out and being a quality pitcher for us every fifth day and giving us a chance to win."

Porcello can neither expect as much run support as he received last year nor control whether the grounders generated by his sinker land in the gloves of his infielders. But if he is able to continue pitching deep into games and keeping hitters honest with his off-speed pitches, he can prove to his skeptics -- Kate Upton included -- that he's more than just a lucky man.