'Mad at the world': David Price hopes he'll never have another season like 2017
3yScott Lauber
City manager? Bobby V in hometown mayor race
3d
MLB Power Rankings: Where does your team fall on our first list of May?
4dESPN.com
From an A-plus in San Francisco to two F's in one division: First-month grades for all 30 MLB teams
6dDavid Schoenfield
One good thing -- and one not-so-good thing -- about your favorite MLB team so far
Arizona Diamondbacks
3dBradford Doolittle
MLB Power Rankings: Which early surprise teams climbed into our top five?
11dESPN.com
Ball cap and gown? Fenway to host graduations
12dDavid Schoenfield
Real or not? Let's examine the biggest April surprise for all 30 MLB teams
12dDavid Schoenfield
Life after Mookie Betts: How the Red Sox are built to win without him
13dJoon Lee
Is Padres-Dodgers the new Yankees-Red Sox? Ranking MLB's best rivalries right now
17dDavid Schoenfield
MLB Power Rankings: Dodgers, Padres and then chaos reigns on our Week 3 list
18dESPN.com
Mar 30, 2018

“The thing I said to him that I really meant was, ‘You never need to change the way that you play this game,’” Derek Johnson recalled recently. “He played it like a little kid, and it was easily, by far and away, the most beautiful thing about him.”

For the better part of the next nine years, Price heeded that advice. He boiled over with glove-smacking joy after hurling high-90s heat past helpless hitters. He challenged fellow pitchers to goofy contests such as the “perfect sit,” in which they found a spot on the bench and tried not to get up, not even to use the bathroom, for nine innings. When he played for the Detroit Tigers, Price rode an electric scooter to and from home games. With the Toronto Blue Jays, he gifted monogrammed blue bathrobes to his teammates.

'You're not in Kansas anymore' 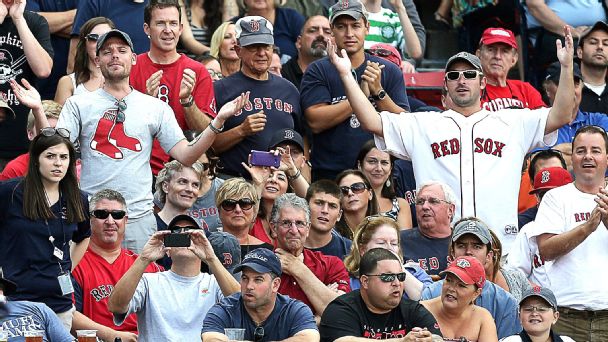 And through it all, he smiled. A lot.

Then came last year. In his second season with the Boston Red Sox after signing a $217 million contract, Price's behavior changed. He berated a reporter after a game at Yankee Stadium, stopped talking to the Boston media except after he pitched, and confronted Dennis Eckersley on the team plane over an innocuous comment made by the Hall of Famer as part of his job as a television analyst.

Price’s perma-smile turned into a frozen scowl, his personality morphed from childlike to churlish, setting a negative tone for a young Red Sox team seeking veteran leadership in the aftermath of David Ortiz's retirement.

Looking back, Price traces most of what happened to a spring-training elbow injury. He didn’t make his first start until Memorial Day, returned to the disabled list in July and made only 11 starts. For the first time in his career, he was scared for his health, and the anxiety seemed to get the best of him.

But as he prepares to make his first start of the season Friday night at Tropicana Field, Price says his elbow is pain-free and his mind is clear. And the Red Sox’s chances of defending back-to-back American League East titles from the advances of the power-packed Yankees will depend largely on the well-being of their co-ace, the highest-paid pitcher in baseball who will help shape the mood within the clubhouse by the sheer force of his personality.

“I could’ve handled things better last year, absolutely,” Price said. “But I didn’t and I’ve moved on. I feel like I’ve gotten better from it. I’ve learned from it.”

AS ACCOUNTS OF Price’s blowups began leaking out last summer, many of his friends struggled to reconcile such erratic behavior with a player who is often regarded as “the ultimate teammate,” according to White Sox pitcher James Shields.

“To me, the game has always had this Little League feel to it with him, and watching from afar, I can tell when a sense of that leaves him,” Vanderbilt coach Tim Corbin said. “When he’s at his very best, it’s when he’s moving around the field and smiling and he’s in the dugout screwing around with his teammates. I’m sure the injuries were tough on him. He’s not a sitter. That’s not easy for a guy like him.”

“Knowing him the way I know him,” added Johnson, now the Milwaukee Brewers' pitching coach, “the injury thing had to take a toll on him. It was obvious that he was frustrated. Because he’s a great teammate and a really good person, and I believe that with all my heart.”

Price prefers to focus on the season ahead rather than looking back. But the 32-year-old does acknowledge that he was “mad at the world” as he attempted to cope with the first serious arm injury of his career.

It all began 13 months ago. Building his arm strength, as usual, in preparation for his first spring training start, he experienced forearm pain after a two-inning simulated game. And although he insisted he felt similar discomfort in previous springs, this was different, so much so he underwent an MRI and traveled to the NFL combine in Indianapolis to meet with orthopedic surgeons Dr. James Andrews and Neal ElAttrache.

According to Price at the time, the doctors said they likely would have recommended surgery if he were younger. But because his elbow had been so resilient over the years, they were confident he could recover with rest. As relieved as Price felt, his mind still raced.

What if the doctors were wrong?

“You could definitely see the frustration and hear it in his voice,” said Shields, Price’s former teammate in Tampa Bay. “When you have injuries, it’s definitely frustrating when you haven’t been hurt your whole entire career. You’ve got to deal with that adversity.”

And when you’re making $30 million a year and coming off a 2016 season that wasn’t up to your impossibly high standards, the stress can pile even higher. 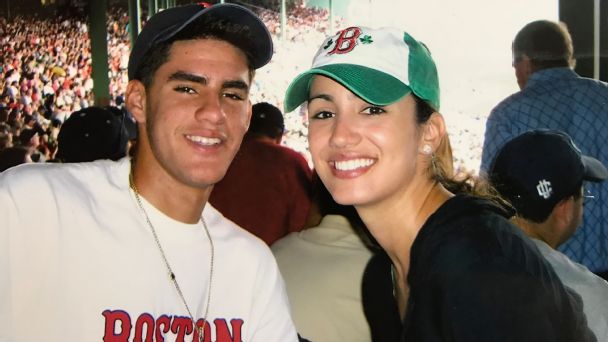 Price’s influence can be seen in pitchers across baseball. His disciples include Rays ace Chris Archer, Blue Jays right-hander Marcus Stroman and New York Yankees right-hander Sonny Gray, who regards Price as a “mentor” and a “guy that I’ve leaned on for a long time.”

"Growing up, my dad put a good emphasis on, whenever you're going to do something, make sure you do it right so you only have to do it one time. Make sure you take the time and pay attention to detail and do it the right way," Price said. "That's what I've tried. But it was tough last year."

Corbin’s most frequent advice to Price is to stay positive in all aspects of his life. But as Price internalized his injury, it became increasingly difficult for him to block out the negativity. He gave up six earned runs in 5 2/3 innings over two rehab starts at Triple-A Pawtucket and left one of those starts without speaking to reporters after previously telling a media relations staffer he would.

“This is a game I fell in love with at a very early age,” Price said. “I put a lot of time and a lot of hard work into the game of baseball. To not be able to go out there and compete and pitch every fifth day at a time where I wanted to have my best season, that was tough. That was tough to deal with.”

If the state of his elbow caused Price to toss and turn at night, he only grew more sleep-deprived in May after his wife gave birth to their first son. He returned to the mound May 29 in Chicago, gave up three runs in five innings and took a no-decision in a 5-4 loss to the White Sox. Later, Price hung out with Shields, who offered his best advice.

“We always bounce stuff off each other,” Shields said. “I definitely was a guy that thought of mentoring him when he first came into the league, but he was already at that leadership level. If there’s anybody in the league that I knew could get through something mentally, it’s David Price.”

Over the next two months, Price posted a 3.82 ERA and 63 strikeouts in 66 innings. He completed at least six innings in seven of 11 starts and allowed three runs or fewer in all but two of them.

But when Price was scratched from a July 28 start at Fenway Park, his worst fears came flooding back.

Not the elbow again.

The latest injury, diagnosed as inflammation, was located closer to the forearm than the elbow, and would improve with rest. But Price’s mood only seemed to darken.

THE WAY PRICE saw it, his publicized tirades were launched in defense of a teammate or staff member.

Price’s airplane incident before a June 30 flight to Toronto was in response to Eckersley’s one-word critique -- “Yuck” -- of Eduardo Rodriguez's performance in a minor-league rehab start. Three weeks earlier, Price’s screaming match in New York was directed at a reporter who made a snide comment on Twitter about the Red Sox’s training staff.

Going back on the disabled list in August left Price with more free time to see and hear criticism on talk radio and social media, cesspools for the negativity Corbin always taught him to avoid.

“Some days were better than others, but overall, the DL, it’s not for me,” Price said. “I just go stir-crazy. I think I missed 40-45 days in 2013 [with a strained left triceps]. That was tough to handle, but it wasn’t nearly what I did with last year. I’m hoping to never go through that again.”

Price returned as a reliever late in the season and didn’t allow a run in 15 1/3 innings, including 6 2/3 scoreless frames in the playoffs. For the second year in a row, the Red Sox were KO’d in the Division Series. But at least Price went into the offseason with a more positive outlook.

Spring training went smoothly for Price, who emerged healthy. He never apologized for what happened last year, although he admitted he behaved badly and reiterated he’s willing to clear the air if Eckersley wants to talk. Price often walked through the clubhouse wearing a hoodie with the slogan “We Need Leaders.” He’s determined to be a better one.

“I feel like I’ve always been one to lead with my actions, and I didn’t do that very well last year,” Price said. “And I know that and understand that. I look forward to getting back to being that faucet and not being a drain.”

If Price is truly unhappy in Boston, he can opt out of his contract after this season. But based on the recent free-agent experiences of pitchers Yu Darvish and Jake Arrieta, it seems unlikely Price will be able to top the four years and $127 million that will remain on his Red Sox deal.

And so, the folks who know Price best hope he can rediscover his unbridled joy for the game amid the pressures that accompany pitching with an enormous contract in a sports-crazed town.

Said Johnson: “It’s his best self. The game has a tendency to kind of wear that stuff down a little bit. But for me, being able to have fun is the best part of him and it’s what makes him great. If he can recapture that, [Red Sox fans] are in for a great ride.”