Take a guess which college is most represented on the Buffalo Bills’ roster. It's not Alabama, LSU or any of college football's blue-blood programs; rather, it's a school that perhaps best represents Buffalo, the Bills and their fan base -- the Iowa Hawkeyes.

Micah Hyde, Ike Boettger, Nick Easley and 2020 draft pick A.J. Epenesa all played under coach Kirk Ferentz, and it's no coincidence Iowa has more players at One Bills Drive than any other collegiate program.

The culture permeating through both teams makes them more alike than not. The Bills and Hawkeyes feature blue-collar coaches and rosters constructed with players who were passed on for one reason or another. And both have found on-field success with a greater-than-the-sum-of-all-parts approach to team building. 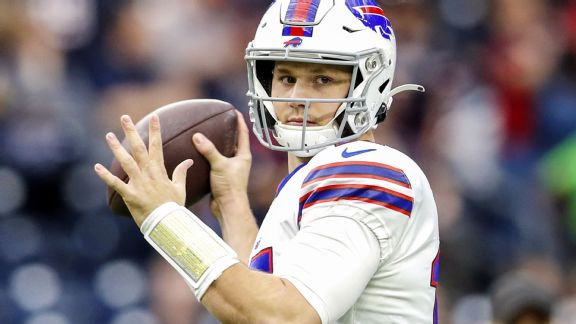 "I do have a lot of respect for what they've been able to do out there over the course of time and sustain it."

Those parallels are so striking that the topic came up during Bills general manager Brandon Beane's phone call to Epenesa when the defensive end was selected in the second round at No. 54 overall in last month's NFL draft.

"That's the first thing I said to him -- 'I don't know why you fell this far, but everything happens for a reason, and Buffalo is a lot like Iowa,'" Beane said. "'You're gonna fit right into here, and you're gonna love our fans, you're going to love our city.'"

Especially in an offseason that might prove difficult for most rookies, given the ripple effects of the coronavirus pandemic. Epenesa has the advantage of being drafted to a team that puts an emphasis on accountability and culture, in which players thrive with chips on their shoulders and a desire not to let their teammates down.

The Bills remind him of the program he just left.

"It's just taking a lot of pride in your work," Epenesa said. "At Iowa, it's 'tough, smart, physical,' that's our mantra and we hold true to that. We aspire to be the toughest players on the field, the smartest and the most physical. ... I'm really excited to go to an organization like this because of the similarities."

'Getting the right people'

Ferentz is the longest-tenured coach in the FBS, having coached the Hawkeyes since 1999. He won four games combined in his first two seasons as the college football landscape reminded him of the disadvantages of being at Iowa, notably how difficult it was to bring in blue-chip talent.

"That's the No. 1 challenge of coaching here, but that's not unique -- every place has its own challenges," Ferentz said. "There are a handful of schools where you select more than recruit."

Ferentz, who spent nine seasons as an assistant coach at Iowa in the 1980s, studied how then-coach Hayden Fry orchestrated the most successful decade in program history.

"One thing I did pay attention to is how things were done here in the '80s under coach Fry," he said. "It was all about getting the right people and doing the right things together."

The top-ranked players in the nation weren't heading to Iowa City; Ferentz instead targeted players who didn't pass the eye test at blue-chip programs. The scrawny linebackers, the diminutive safeties, the cornerbacks who "weren't fast enough." If their tape showed they could play, Ferentz gave them a chance.

It's how he found a future NFL Defensive Player of the Year in Bob Sanders, whom Ferentz called the "poster child" of what he and his staff look for at Iowa. Sanders, a 5-foot-8 defensive back, developed from an undersized afterthought to a second-round draft pick in 2004. In 2009, Ferentz brought in Hyde to the program; he was a two-star, dual-threat quarterback who has blossomed into a Pro Bowler (2017) and one of the NFL's best safeties.

"What you learn is not every guy is going to be a five-star, four-star recruit. You have to try to see other things in a player that's going to allow them to be successful," Ferentz said. "We don't always follow the chart -- the size/speed chart. We try to see something else in guys.

"I don't think the NFL is a whole lot different because you only get so many first-round draft picks. ... Recruiting for us is like getting guys in the third, fourth, fifth, sixth rounds. Instead of focusing on what guys don't have, we just try to see what guys do have, and it all starts with attitude."

Ferentz said the unifying mentality of his players is their willingness to be coached in a system that molds them into professionals.

"They're getting two-star, three-star guys that are overlooked," Hyde said, "and they're basically turning them into NFL prospects. They're getting them on campus, and from the jump, they're adding weight, training them how to think and prepare.

"It really is a professional college system."

Chip on his shoulder

Ferentz might as well have been shaking his head when the Bills drafted Epenesa in the second round.

The longtime Iowa coach thinks the defensive end will thrive in western New York. Ferentz was elated to see the second Hawkeye of the weekend go off the board, the first being offensive tackle Tristan Wirfs to the Tampa Bay Buccaneers at No. 13 overall.

"It was a mistake," Ferentz said. "This guy is a better player than the 54th pick in the draft, but time will tell. I think the Bills did a hell of a job and I'm happy he's there."

Epenesa doesn't really fit the mold of Iowa's typical recruit; the former five-star player is the school's second-highest-ranked recruit. He had 25 scholarship offers but chose to gather with his family in Ferentz's office to commit to his father's alma mater, which is more or less exactly how Hawkeyes fans would expect a five-star recruit to commit to Iowa.

Even with all his accolades, Epenesa came in with the same mentality as Hyde, Sanders and hundreds of players before him.

"If you want to talk about Micah, or A.J., or Ike, they've all been willing to come in here and work hard and be accountable," Ferentz said. "Just let us work with you. ... If a guy loves football, they're willing to do that."

Epenesa was productive during his three seasons at Iowa, although he spent only one as a starter -- a topic that came up during his interviews at the scouting combine. When asked if not starting ever upset him, Epenesa said no, because the players ahead of him on the depth chart had earned their positions.

Ferentz thinks the answer might have scared teams off, and when coupled with his 5.04-second 40-yard dash, those teams might have seen Epenesa as slow and unmotivated.

Their loss, he said.

Beane saw right through the combine drills and, just as Ferentz does with his recruits, he trusted the tape.

"The 40 time, you know, that happens to people -- certain people have parameters ... that they're going to drop the value if they don't meet certain, you know, measurables," Beane said. "Call me crazy, I got play speed and production in watching the film, I rely more on that. I understand the measurables and don't think I don't talk about them, but at the end of the day, I go back to the tape."

Was AJ Epenesa the right pick for the Bills?

While many draft pundits graded Epenesa as a first-round prospect, he's happy to be with the Bills.

"Obviously, I was looking forward to possibly being a first-round draft pick, but I just needed one team to give me an opportunity," he said. "I knew my time would come and I was just waiting for my phone to ring, and it was a little disappointing. But I'm very excited to be part of this organization.

"I feel like I always try to play with a chip on my shoulder and give myself a little extra motivation. I was number 54; there were 53 people picked in front of me. ... Yeah, it gets me fired up and I want to be able to go out there and prove to people that they shouldn't have doubted [me]."

Epenesa projects as a left defensive end who can rotate to the interior defensive line in Buffalo, the exact type of versatility the Bills covet. When, exactly, he'll get to display that versatility is not yet known.

The Bills began their virtual rookie camp Monday, focusing on activities such as learning the playbook. Players will be responsible for their own physical conditioning, and the accountability instilled in Ferentz's players should aid Epenesa.

BIG MOOD.@ajepenesa24 is a Buffalo Bill.

Each year, Iowa players participate in the Hawkeye Championship -- which assigns point values to athletic, academic and behavioral achievements, both positive and negative.

Teams are drafted within the roster and are not based off on-field skills but by leadership and responsibility off it. Set a personal best in the weight room? You'll earn points for your team. Break any team rules and you'll lose them.

Ironically, the Bills have done something similar in previous offseasons -- they call it the Bills Challenge. (Add that to the list of Epenesa's seamless transitions.)

"I really believe when you draft an Iowa football player, you're really getting a second-year pro in terms of their accountability, professionalism and preparation for the game," ESPN analyst Matt Bowen said. "What I mean by second-year pro, it's those characteristics ... I'm talking about the player -- the football character that they bring to an NFL facility.

"I can understand why coach McDermott would target Iowa players because I see that on film with the Buffalo Bills -- especially on the defensive side of the ball."

Bowen, who played for Ferentz at Iowa in 1999 and for the Bills in 2006, said the two programs are built around the philosophy that scheme fit is more important than flashy play.

Bowen sees an opportunity for Epenesa to shine in Buffalo even as he carves out a role behind Jerry Hughes and Mario Addison. Just like Hyde, beyond the performance in athletic drills, Epenesa's film is too strong to ignore.

A year ago, it seemed improbable Epenesa would last until the No. 54 pick, but he may have ended up in the perfect spot.

"He's not gonna win the sexy appeal, I get that, but we're Buffalo," Beane said. "And nobody thinks there's anything sexy about Buffalo, so he's going to fit us well. He is a good ol' Iowa boy."