Sure, the Mets have a long and dubious history with medical issues, and yes, the relationship between certain players and the team has seemed odd -- co-dependent, rather than the typical employer-employee dynamic. But the strategically leaked he-said, he-said about the circumstances of pitcher Matt Harvey’s absence from the park last weekend should not distract from the reality that the pitcher didn’t show up for work.

This whole issue is not a Mets problem -- this is a Matt Harvey problem.

That the Mets chose to suspend him rather than to give him another pass shows they are fed up, and they are looking to effect change with a player who might have enormous value -- but only if that change happens.

Which is why folks with other teams are wondering whether the Mets will consider the nuclear option available to them: sending Harvey to the minors.

They can do this without his permission because he is a player with less than five years of service time; at the start of the season, he had four years and 72 days.

Making such a dramatic move could accelerate the team and the player toward a divorce that seems inevitable at this point, but on the other hand, the Mets might feel it’s their best chance at producing the change in Harvey they want, and need. It would be a dramatic wake-up call that would certainly get his attention because it would have the potential of altering the timeline by which he would become a free agent.

As it stands, Harvey is on track to accumulate the requisite time in the big leagues to hit the open market in the fall of 2018, but if the Mets hold him in the minors, they could back that up by a year, at least. If the Mets sent him to Triple-A or Double-A for the rest of 2017, he might not reach free agency until he's 30, rather than 29 -- and that could make a difference in the perception around his potential.

The easiest path for Mets officials at this point would be to surrender to his inconsistency and stubbornness, throw up their hands in frustration and dump him on the open market -- and right now, they might get 10 cents or 20 cents on the dollar for what his value might be if he rebounds. Dumping Harvey to another team might be the best thing for him, but it might not be the best resolution for the Mets. 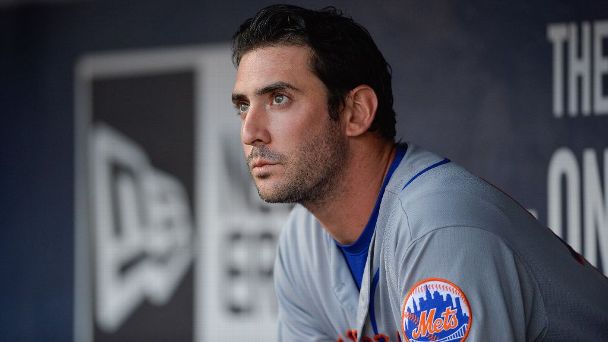 Injuries, questions about his work ethic and a suspension put Matt Harvey's future with the Mets in doubt. Buster Olney
Podcast: Mets' choices with Harvey

Without Noah Syndergaard, Steven Matz and Seth Lugo, the best-case scenario for the Mets would be for Harvey to be a good, productive pitcher who helps the team make up ground on the Nationals. But Harvey has not started well in his first season back from surgery for thoracic outlet syndrome. His velocity is down and he’s trying to adapt to his new physical reality. Over his past two starts, he has allowed 12 runs in 9⅔ innings. His past three starts have included almost as many homers allowed (four) as strikeouts (five).

The Mets could fully justify a minor league assignment by saying Harvey needs more time to come back from his injury, with the corollary message to the pitcher: Get back to doing what's needed to be in the best possible position to pitch -- which includes showing up to the ballpark.

With young players in their first, second or third year of service, teams will hold the possibility of a demotion over their heads as a stick: Either you get better or we’re sending you down. One AL official told the story of sending a talented young player to the minors after repeated alcohol incidents, saying, “You need to get this sorted out.”

Whatever it is the Mets want Harvey to do, they have unused leverage to make that happen. Whether they would seriously consider demoting Harvey to the minors might depend on the pitcher’s actions in the days ahead.