Olney: Hitters who can't beat the heat getting left behind
5yBuster Olney
May 20, 2018

HOUSTON -- There is lingering anger within the union about so many veteran players being bypassed in last winter’s free-agent market. Matt Holliday has 314 career homers with a lifetime .889 OPS, and he is unsigned. Jayson Werth had to settle for a minor league deal with a Mariners after hitting 10 homers in 70 games for the Nationals last season. Mark Reynolds, 34, bashed 30 homers for the Rockies last year but says the only offers he got during the winter were minor league deals. When Washington pitched him a proposal in early April, he figured he had reached a now-or-never crossroad, so he took it.

Some players believe strongly some of the established players were bypassed because of financial reasons, with clubs preferring the younger, cheaper players to the more expensive and more experienced alternatives. But it seems possible older players generally are being swallowed up by the strategic changes that have quickly manifested in recent seasons.

More and more teams are adhering to the belief that it’s often best to limit the exposure of starting pitchers to little more than two turns through the opposing lineup, and that your chances for success improve if you deploy a series of hard-throwing relievers in the last innings of each game. To facilitate that constant need for bullpen help, teams are sometimes playing games with only three or four reserve position players.

“What that means is that you need versatility from your extra guys,” one evaluator said. “There’s a higher premium placed on the players who can play multiple positions.”

The designated hitter/corner outfielder extra man has become increasingly rare. Manny Mota was one of the best pinch hitters of all time, but he rarely played in the field in his last six seasons with the Dodgers, from 1974 to 1979. Now, no team would reserve a roster spot for someone in such a limited, specific role. Said a big league staffer, “You never carry the veteran pinch-hitter guy anymore.”

And there is this: As the use of analytics and high-velocity relievers skyrockets, players in regression might be less equipped to cope. As ESPN researcher Sarah Langs discovered a few weeks ago, the number of pitches thrown at 96 mph or more across baseball has more than tripled in the span of just four years -- from 6,000-plus to the 20,000-plus pace of this season.

Some players in their mid-30s, such as Miguel Cabrera, are still adept at catching up to fastballs thrown in the upper-90s. But the simple fact is that as most players age, their reaction time is diminished, and many struggle against high velocity.

There are 22 hitters who have seen at least 30 pitches of 96 mph or faster this year and have yet to generate a hit against that high-velocity stuff. The bulk of those players are over 30 years old, including Ian Kinsler, Denard Span, Sean Rodriguez and Paul Goldschmidt. Through Friday's games, the Diamondbacks’ first baseman had seen 77 pitches of 96 mph or faster without logging a hit, the most in the majors.

From 2016 through 2018, the hitters with the lowest averages against 96-plus mph include (among others) Chris Davis (.120), Mike Napoli (.123), Ryan Braun (.151), Jose Bautista (.165) and Ian Desmond (.178), all beyond their 30th birthdays. There are more relievers throwing harder than ever, and if a hitter is perceived to struggle against high velocity, he’s going to see lots of high velocity.

One manager said, “The way it used to be -- I hate saying that, because it makes it seem ancient, and it really wasn’t that long ago -- is that an advanced scout would pick up on a weakness, and then it might take the rest of the league a couple of weeks to follow. Now if you’ve got a weakness, everybody knows right away because of the analytics, and they will attack it until you can change.”

For older players, making those adjustments against the oncoming wave of hard throwers appears to be more difficult.

News from around the major leagues

Count Jose Altuve as one in the growing army of fans of Atlanta Braves second baseman Ozzie Albies, the high-energy leadoff hitter who had 40 runs and 30 extra-base hits in his first 43 games this season. “Twenty-one years old,” Altuve said, referring to Albies. “He’s better than me when I was 21 years old.”

• With the Astros searching for more offensive production from the outfield, they promoted Tony Kemp from the minors after Kemp started this season batting .335 with a .407 on-base percentage in Triple-A. Kemp had some big league time in 2016 and 2017, and last year, he began a ritual to help remind him of how difficult his profession can be. On off days, Kemp will take time to hold a baseball and examine all sides, and he will remember the challenge of his task -- trying to hit this object zooming past at 95 mph, with vertical and horizontal movement.

• Washington closer Sean Doolittle became one of the first relievers to use the newly implemented bullpen carts last weekend, and he gave it high ratings. Doolittle said that because he got to the mound a little more quickly, he was able to finish all of his warm-up pitches with time to spare -- something that hasn’t always happened when he jogs out of the bullpen on his own. Said Doolittle of the carts: “I think there’s a practical application.”

• Cubs catcher Willson Contreras is a rising star and an emotional player who gestures, points and shouts. Not surprisingly, opponents often complain about his body language, suggesting that he’s just trying to call attention to himself. Contreras is well aware of that criticism, and a couple of weeks ago, he said quietly, “I hope I can get to know players on other teams better, and that way, they’ll get to know me better.” Staffers in the Cubs organization explain that Contreras is just hypercompetitive and doesn’t mean to show up anybody. 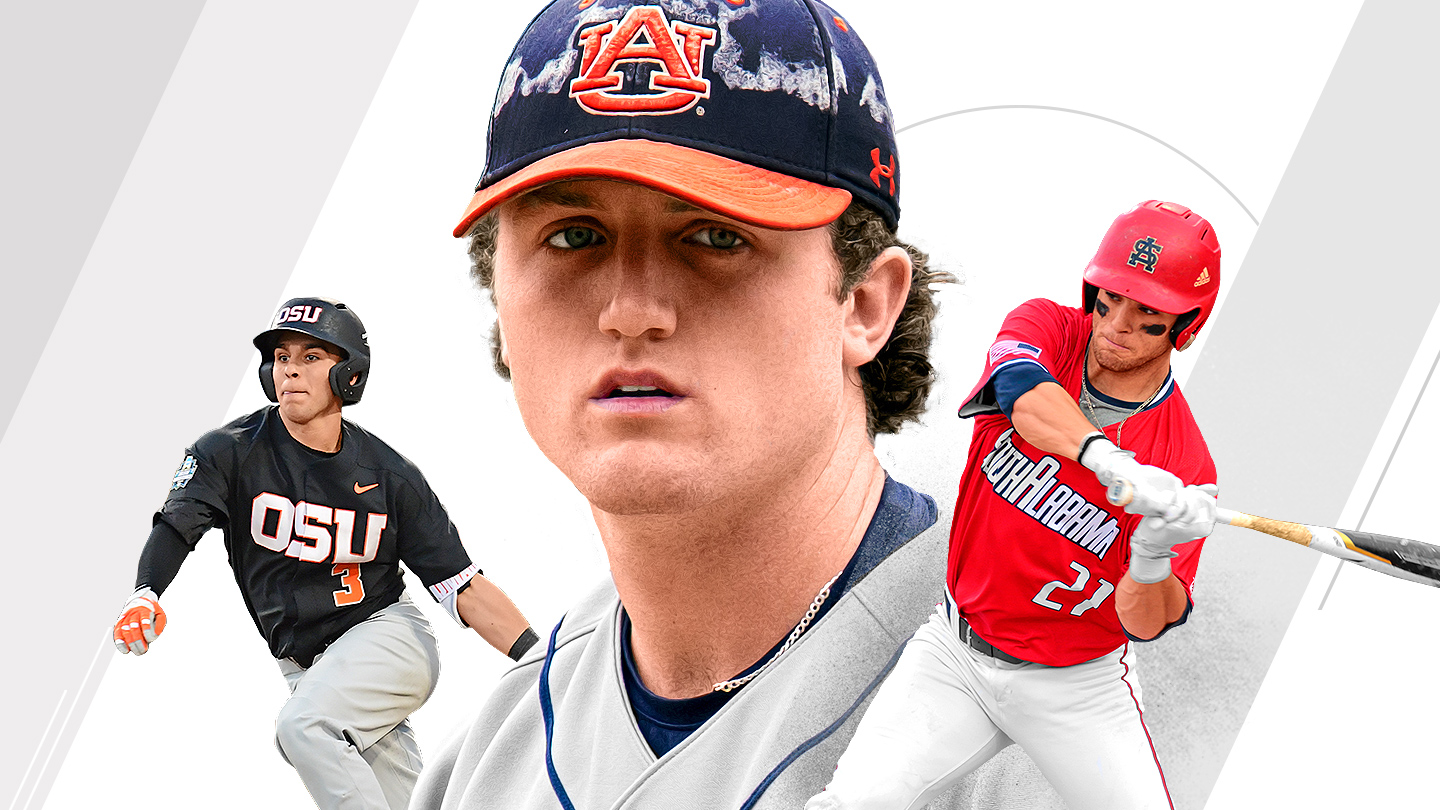 Which high school and college stars could your team be targeting? Story »

• The Angels’ Andrelton Simmons has long been regarded as the game’s premier defensive shortstop. His former coach, Terry Pendleton, suggested when Simmons was a rookie that he would turn out to be better than Hall of Famer Ozzie Smith because of his superior arm. But this year, he’s also off to his best start at the plate, ranking among the major league leaders in hitting, with more extra-base hits and more walks than strikeouts. One scout says Simmons has learned to properly hunt pitches on which he can do damage -- especially fastballs.

• Altuve shakes hands very similarly to the way the late Tony Gwynn did -- as if the batting champions want to offer a proper and polite greeting while, at the same time, protecting their moneymakers. Altuve said that when he senses someone intends to give a more than firm handshake, he’ll put his hand away quickly.

• Indians shortstop Francisco Lindor has sometimes picked the brain of teammates Corey Kluber and Carlos Carrasco to understand how and why pitchers will make adjustments in the midst of a game. He feels this has helped his own ability to make changes. Lindor says he felt that it would sometimes take days for him to make adjustments, and now he can increasingly do it within the same plate appearance. Lindor has cut his ground ball/fly ball ratio dramatically, from 1.74 in 2016 to 0.84 this year, and after hitting 33 homers in 2017, he’s on pace to surpass 40 this year as he continues to learn about his swing and about opposing pitchers. He and the Indians face the defending AL champion Astros on Sunday Night Baseball.

• When Indians pitcher Carrasco was 9 years old and in elementary school, he received a new pair of shoes through a giving program. Somewhere in his home in Venezuela, those same shoes are preserved because of what they meant to him, and he can still remember the feeling he had when they were handed to him. “Oh my god, yes,” Carrasco said, describing black shoes with yellow stripes. “I had the same feeling like when I pitch. I was happy, nervous; I never had a gift like that.” His hope is that through his own charity work, children experience the same kind of feeling he had when he got those shoes.

At his current pace, Mookie Betts would finish the season with 169 runs, 119 extra-base hits, 50 homers and 40 stolen bases. He leads all players in fWAR by a significant margin; he leads in wRC+, and it’s not close.

• The Brewers’ Josh Hader has 50 strikeouts among the first 87 hitters he has faced this year.

Thursday: Boog Sciambi on Justin Verlander’s old-school performance; Sarah Langs and The Numbers Game; and Andy McCullough of the Los Angeles Times on the mess that is the Dodgers' 2018 season.

Wednesday: ESPN’s T.J. Quinn on the details behind the Cano suspension, and the best thing in baseball this year; Keith Law on a replay controversy in Atlanta and Bryce Harper’s unusual season; and Paul Hembekides on the most underrated star in baseball history.

Tuesday: Jerry Crasnick on the A.J. Pollock injury and how the Supreme Court gambling decision will affect baseball; the Braves’ Ryan Flaherty on the Baby Braves, Ronald Acuna Jr. and Albies; and Sarah Langs plays The Numbers Game.