If A.J. Hinch makes an induction speech at Cooperstown someday, he could thank Lance McCullers Jr., Brad Peacock and Charlie Morton for helping to make him look really smart during the Houston Astros' inaugural championship run.

Hinch rightly received credit for eschewing the traditional bullpen structure after Ken Giles’ declining performance midway through October last year, and for picking the right guys at the right time to get outs late in games. But unless the hands in the all-hands-on-deck strategy had performed as well as McCullers, Peacock, Morton and others did, Hinch probably would have been second-guessed for eternity (which, as fellow manager Bruce Bochy once noted, is what happens when you lose in the postseason). McCullers closed out the New York Yankees in Game 7 of the American League Championship Series, Peacock shut down the Los Angeles Dodgers in Game 3 of the World Series and Morton finished the World Series, while others pitched in, as well.

But the situation was unbelievably fragile, and as the Astros try to become the first team since the 1998-2000 Yankees to win the World Series in consecutive years -- and the Astros' MLB-leading run differential in 2018 suggests they have a hell of a shot -- they should probably acquire at least a bullpen safety net before the July 31 trade deadline. This is one of two developing holes for Houston, which made the most important deal last summer when it acquired Justin Verlander. 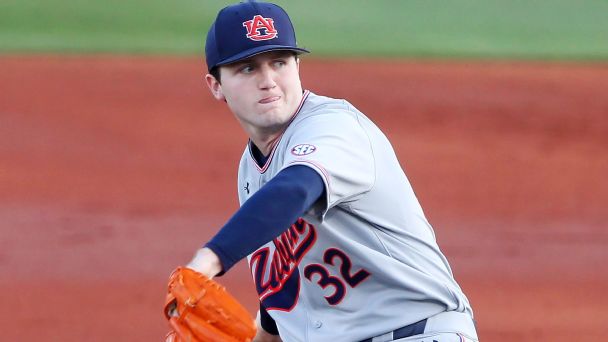 With the MLB draft coming up June 4-6, we rank the top 100 prospects, with Auburn star Casey Mize coming in at No. 1. Story »

Hinch has given Giles a shot to reclaim his closer role this year, and the results have been mixed. He is 10-for-10 in converting save chances and has allowed one walk in 18 innings. But Giles has a 4.50 ERA, opponents have a .274 average against him this season -- easily the highest in his career -- and some of the underlying metrics indicate vulnerability. His swing-and-miss rate is 14.1 percent, significantly lower than his career high of 19.9 percent two seasons ago, and the contact rates against him -- in and out of the strike zone -- have climbed. (The Astros undoubtedly have their own more precise metrics.) Rather than hand every save situation to Giles, Hinch has used him in spots when the Houston staff believes the matchups are favorable. Chris Devenski, very effective against left-handed hitters, also has a couple of saves, and Peacock has one.

So the Astros could go after a late-inning reliever -- if they identify someone in the market whom they believe has the stuff to step in as an October closer. Roberto Osuna of the Blue Jays might have been an option, but he is on administrative leave as MLB continues to investigate allegations of a domestic violence incident, and it’s possible he will face suspension. As written here last weekend, Kelvin Herrera of the Royals checks every box for contenders with his experience in various roles, and he still has not issued a single walk, but the Astros will weigh their own assessment of whether he would give them the needed bullpen boost and could engender confidence with the ball in the ninth inning of a Game 7. And there is the matter of the price tag: The Royals have leverage to ask for a high price, because there will be so few relievers of Herrera’s caliber available in the market.

The Padres’ Brad Hand is having another good season with 17 saves, but he has issued 14 walks in 28⅓ innings. The Orioles’ Zach Britton could develop into a target, but the Houston and Baltimore front offices could not consummate a Britton trade last summer, with the Astros believing that the O’s created a moving target in what they wanted in return. Alex Colome had been an available closer, but the Mariners ambushed the market and dealt for the righty last week. Rival evaluators believe the Astros will comb through the many reliever options that could develop over the next eight weeks.

The Astros might eventually need to add a left fielder/designated hitter-type thumper during the season. Kyle Tucker is Houston’s best position-player prospect and is playing left field and right field in Triple-A right now, and performing effectively; it’s possible the Astros could give him a look later this season. But the Astros’ standard is high: They’re trying to make World Series history, and unless someone steps up and takes control of the left-field job -- Jake Marisnick and others have struggled -- Houston has the option of considering a few of the left field and DH options that could develop into a buyers’ market in July and August, just as happened last year.

If you recall, Jay Bruce had an excellent season for the Mets last season and yet there were no ardent trade suitors before the deadline, and he passed through waivers unclaimed. In the end, the Mets dumped him on the Indians for some salary relief. Inevitably, there will be similar opportunities for the Astros, who might be able to improve their left-field situation without having to surrender much prospect value.

There is a right time and a wrong time for contenders to trade. The Braves, for example, are probably in the pennant chase a year before anybody expected, and while it makes sense for Atlanta to make some modest auditions, a blockbuster for someone like Manny Machado would be a very expensive luxury at a time when the Braves need to continue fostering their farm system.

But for the Astros, the timing for doubling down and fixing problems could not be more perfect. They are right in the middle of their window to win, as they have a historically great rotation and a dangerous lineup. But they’ll have to run the AL gantlet in the playoffs before they have a shot at back-to-back titles, and they’ll probably need a better bullpen to survive the Red Sox/Yankees/Indians steel-cage matches. Whether it’s Giles or somebody else, they could really use a lockdown closer.

News from around the majors

The Cubs’ Javier Baez and the Pirates’ Joe Musgrove exchanged words the other day, after Musgrove’s hard slide into second -- and quickly settled their differences. The dust-up was over by the time the bullpens charged in from the outfield, another moment that raises this question: Why doesn’t Major League Baseball forbid all relievers from joining a bench-clearing incident, in the way that the NBA disallows anybody from leaving the bench during a fight, in an effort to reduce the potential chaos?

• Outstanding performances by Sean Newcomb and Mike Foltynewicz on Thursday and Friday dampened the perception that the Nationals’ great advantage over the Braves in the National League East race is in rotation strength. Newcomb is throwing more strikes and Foltynewicz has a wipeout slider, and they are two of baseball’s top-10 fastest-working starting pitchers, averaging 20 seconds between pitches.

• Before Brandon Belt had an appendectomy and landed on the disabled list, he was among baseball’s hottest hitters, with a .307 average and 11 homers. For years, Belt was perceived to have a significant hole in his swing: Pitchers pounded him with inside fastballs with great success, and in an effort to get to that pitch, Belt would sometimes try to turn his front shoulder more quickly to hit that pitch. But he made an adjustment during the winter, deciding that he wasn’t going to worry about getting jammed; rather, the left-handed-hitting Belt was going to maintain his hitting mechanics, aim to drive the ball to left-center field and keep that front shoulder tucked. If the pitcher did get a fastball in on him, Belt figured that he might be strong enough to punch singles over the infield -- and, at the same time, be in better position to do damage on other pitches. It’s a difficult adjustment that some hitters are never able to make. “It only took me 10 years,” Belt said drolly.

• Former Red Sox and current Cubs third-base coach Brian Butterfield raved about the toughness of Boston first baseman Mitch Moreland, who is a candidate to make the AL All-Star team this year. Last year, Butterfield said, Moreland played with a broken toe for about a month before anybody realized it. “He’s tougher than a six-nail board,” Butterfield said.

Friday: Karl Ravech on the pitching future of Clayton Kershaw, after yet another back injury; Tim Kurkjian has stories, including the time a manager frightened him and a player screamed at him.

Thursday: Keith Law discusses the top of the MLB draft and a change that MLB should make for fights; Sarah Langs of ESPN Stats and Information presents the top 10 pitches in baseball; Coley Harvey on Gleyber Torres.

Wednesday: Jerry Crasnick on the Phillies, and perhaps some buyers’ remorse for the Cubs; Jessica Mendoza shares her thoughts on the Anthony Rizzo ruling and answers an impossible question; and Paul Hembekides of ESPN Stats & Information with some historical perspective on Mike Trout and Mookie Betts.

Tuesday: Boog Sciambi on the question of whether baseball is “judgey” (and it’s got nothing to do with Aaron Judge), and some great and terrible choices in store for AL All-Star manager A.J. Hinch; Sarah Langs of ESPN Stats & Information plays The Numbers Game; Todd Radom’s weekly quiz.