CHARLOTTE, N.C. -- Carolina Panthers quarterback Cam Newton wouldn’t reveal on Wednesday potential names for his second child that is due any day, but he guaranteed it wouldn’t be Josh Norman.

“Josh Norman? Not in a million years. No," joked Newton, whose first child born last year on Christmas Eve was named Chosen Sebastian. “If I were to tell Josh Norman I’m naming my next child Josh...Joshua?...nah. Nah."

Newton and Norman, a cornerback for the Washington Redskins, were teammates for four year until the Panthers rescinded the franchise tag on the 2015 Pro Bowl selection in April. They will face each other for the first time outside of practice on Monday night at Washington’s FedEx Field.

Newton about to become a dad again 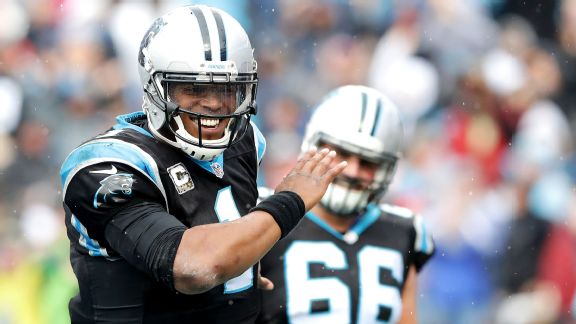 Cam Newton and his longtime girlfriend Kia are expecting their second December baby any day.

The two had an intense, competitive nature in practice that came to a head in a 2015 training camp scuffle. The fight occurred after Norman intercepted a pass and then stiff-armed Newton as the Pro Bowl quarterback tried to tackle him.

After the season, in Scott Fowler’s book entitled “Panthers Rising," Norman described the mutual respect he and Newton had for each other.

“Cam’s a good guy, but we didn’t really talk,” Norman said in the book of the relationship with Newton before the fight. “We had an admiring respect. A respect, like, a sniffing kind of respect. You know when two dogs sniff and they know what’s good and then they go their different ways? And don’t really play with each other?

Newton broke into laughter on Wednesday when told of that comparison.

“You know, Josh has some weird analogies," the reigning NFL MVP said. “And that’s what you’ve got to love to hate. But that’s him."

“As far as respect, I respect Josh," Newton continued. “Our relationship goes way beyond the game of football. I look forward to the matchup on Monday night."

He just won’t name his second child after Norman. Perhaps it has something to do with what Newton called Norman’s “hair phases" when the former Coastal Carolina star arrived at Carolina in 2012.

“I remember Josh came in here with a Mohawk scissored like a lawnmower went through it a couple of times," Newton said. “He had the Mohawk with the lines, lines, lines... I don’t know. I just think that was a phase of his life.

“But I’ve got all respect and love for Josh."