CHARLOTTE, N.C. -- The Minnesota Vikings were preparing for a Monday night game against the New York Giants in October 2016 when nickelback Captain Munnerlyn saw what Atlanta Falcons wide receiver Julio Jones had done to the Carolina Panthers.

"I was, 'Nah, I think that's wrong,'" recalled Munnerlyn, who returned to the Panthers last season after three seasons spent playing for the Vikings. "I was like, 'No way!' I knew the guys in this locker room. I was like, 'There's no way. No way.'"

Jones caught 12 passes for a career-high 300 yards that day in Atlanta. He so embarrassed the Carolina secondary that cornerback Bene Benwikere, who primarily covered Jones after then-rookie James Bradberry was sidelined after only 17 plays with turf toe, was released the following week.

Heading into Sunday's 1 p.m. ET game at the Falcons, Bradberry is the only starter remaining from that secondary unit.

"I think they burned that tape," Munnerlyn said with a laugh.

Not all copies. Backup safety Colin Jones, who played in that game two years ago, watched portions of the tape this week to learn what "not to do wrong."

"I'll always spin it in a positive light," he said with a smile. "Say it was a good learning experience and we've been trending up since."

Trending up, indeed. In his past three games against the Panthers, primarily with Bradberry covering him, Jones has 15 receptions on 30 targets for 258 yards and no touchdowns.

Norman used his size and physicality to hold Jones to 10 catches for 107 yards and no touchdowns in 2014. He was so successful that while on ESPN's "NFL Countdown" show, Norman said Jones "completes me," borrowing a line from the movie "Jerry Maguire."

Though Jones had a big game against the Panthers in 2015, only 80 of his 178 yards receiving came against Norman. In two games that season, Norman held Jones to nine catches for 113 yards and no touchdowns.

Norman went on to make the Pro Bowl, and through free agency, he became the NFL's highest-paid cornerback at the time with a five-year, $75 million deal.

Bradberry has a chance to make a name for himself over the next three games facing Jones, Cincinnati's A.J. Green and Odell Beckham Jr. of the Giants.

And, oh, he has a prime-time date against Pittsburgh's Antonio Brown later in the season.

"We've been telling him that," Munnleryn said. "This year is going to be a special year for him. He definitely can make a name for himself."

'Reaching for the stars'

Bradberry acknowledges this stretch is a big opportunity for him even though one of his good friends said he'd have a "hard time" against so many high-profile receivers when the schedule came out. 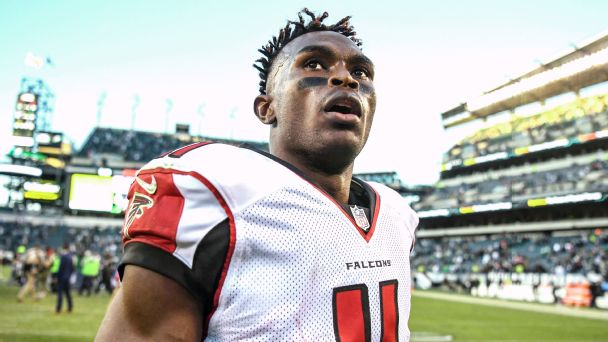 Some friend, but Bradberry understood.

That's about as brash as you'll hear from the soft-spoken Bradberry, and he didn't say it in a brash way at all.

He's also not looking past Jones, who is coming off a 10-catch, 169-yard performance in an opening loss against Philadelphia. He knows the Falcons are focused on doing a better job, particularly in the red zone, where they scored only nine points in five trips inside the Philadelphia 20.

"Just competition," he said. "That's why we play football is to be competitive and have fun out there."

Jackson, who fared well in his debut against Dallas, is up for the challenge.

"I'm ready to compete," said the second-round draft pick out of LSU, who watched on television when Jones humiliated the Panthers. "That's it."

The Falcons also liked Jackson in the draft and spent a lot of time evaluating him. His attitude, in particular, caught the eye of coach Dan Quinn.

"I recognized that he was a real competitor right away and one of those players that just wasn't going to back down," Quinn said. "It just came across that way, not in an arrogant way, but in a guy that really wanted to fight and challenge you."

"If you look at guys who really play Julio very well ... Josh Norman, he's long; James Bradberry, he's long; [Minnesota's] Xavier Rhodes, he's long," Munnerlyn said. "You've got to be able to match up with that guy with length.

Working in Jackson's favor is his speed and swagger that has been compared to Norman's. His willingness to come up and make the tackle as he did Sunday in the first half when he held Dallas running back Ezekiel Elliott to a 2-yard gain on a cutback play also works to the rookie's favor.

Munnerlyn called that a "wow" play.

"It definitely opened our eyes up to, 'Yeah, he's ready. He's ready to take that next step,'" Munnerlyn said.

The entire secondary has taken a step forward since that 2016 game in which Jones created a single-game highlight reel. The turnover in that group resulted in more speed, physicality and overall talent even though Pro Football Focus ranked it 29th out of 32 teams before the season.

Jones isn't surprised Bradberry is still around. Talent aside, he's seen a much more dedicated and harder working player since then.

Bradberry said hearing the fans chant "Julio! Julio!" after the game and the performance of the secondary in general motivates him to this day.

"I just knew we couldn't let that happen again," he said. "We also let our coaches and fans down. I didn't want to see that reaction on their face again."