As much as Harper believes Wilks should be a "layup" to go from interim head coach to full time after leading the Panthers to a 6-6 record in 2022, he understands why owner David Tepper is in New York City on Friday to interview Payton, the former NFL coach who remains under contract with the Saints.

"If you bring in a middle-of-the-road guy or somebody that the fans don't recognize, you're going to turn off a lot of people," he said, reminding the fans and players want Wilks. "One way to not make everybody get turned off is to bring in a guy like Sean Payton."

In other words, Payton is a proven commodity who in 15 years coaching the Saints had the fourth-best winning percentage in the NFL (.631, 152-89) behind the New England Patriots, Green Bay Packers and Pittsburgh Steelers. 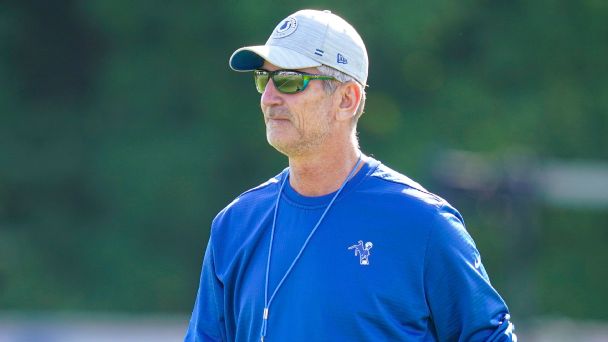 Payton also has a proven record for making the playoffs, leading New Orleans to the postseason nine times, including four of his last five seasons before stepping away from the job after the 2021 campaign.

Payton would bring a level of credibility Tepper wouldn't find with the young offensive coordinators the team has requested permission to interview: Shane Steichen of the Philadelphia Eagles, Mike Kafka of the New York Giants and Ken Dorsey of the Buffalo Bills.

He would give more credibility than the former head coaches Carolina has interviewed: Wilks, Frank Reich and Jim Caldwell.

"I'm prejudiced, but behind Bill Belichick [New England Patriots], I think Sean is one of the best coaches in the National Football League right now," said Joe Vitt, an assistant head coach and linebackers coach under Payton from 2006 to 2016. "I personally, right now, believe that if he never coached another game he'd be in the Hall of Fame."

"I trust Sean Payton to get things right more than I trust the upstairs [management] of Carolina right now, just because he's gotten things more right," Harper said. "Sean is going to be considered a top-five coach the moment he steps back in the league."

That Saints general manager Mickey Loomis granted Carolina permission to interview Payton is significant. He told reporters after the season that all teams interested in Payton discussed compensation New Orleans would want before permission was granted.

So Carolina understood the potential cost in terms of draft picks and money when on Sunday it sought permission to talk to Payton, whose contract with the Saints runs through the 2024 season.

The same goes for the Houston Texans and Denver Broncos, who interviewed Payton this week, and the Arizona Cardinals, who also have requested permission to speak with the 59-year-old coach.

"Before this past weekend, I didn't think Sean Payton was a viable candidate for the Carolina job," Harper said. "Now it's probably like a twenty-something percent chance it could happen."

With the Panthers having to trade for Payton, what are the pluses and minuses the franchise must consider?

Coaches haven't been moved for compensation often, particularly within the same division, but the results have generally been good despite the price.

In 2000, Belichick went from the Jets to the Patriots for a first-round pick, fourth-round pick and seventh-round pick. New England won the first of six Super Bowls in Belichick's second season -- with 2000 sixth-round pick Tom Brady at quarterback.

Although it wasn't within the same division, Jon Gruden led the Tampa Bay Buccaneers to the Super Bowl in his first season (2002) after the then-Oakland Raiders traded him for two first-round draft picks, two seconds and $8 million to be paid over three years.

Payton said this week that "the compensation for the Saints would be a mid- or late-first-round pick." Loomis said the price will be different for every team.

Sources around the league believe Carolina would have to give up more because it's in the same division. It could be closer to the kind of deal Tampa Bay agreed to for Gruden.

As for luring Payton to Carolina financially, his salary won't be an issue. Tepper is worth $18.5 billion, according to Forbes, and he gave Matt Rhule a seven-year, $62 million deal in 2020 despite Rhule having basically no NFL experience.

The Panthers need a fix at quarterback, which has been a revolving door since 2018. Judging by the long list of offensive-minded candidates Carolina has interviewed or scheduled to interview, that is a priority.

Payton would be at the top of the list. Drew Brees didn't look like a Hall of Fame quarterback his first five seasons with the San Diego Chargers.

"It's a quarterback-driven league," Vitt said. "So if your head coach is also the playcaller and is also developing the offense, that's a plus. When he got Drew Brees, Brees was far ... away from being a complete package."

However, if they trade the No. 9 overall pick to the Saints to get Payton, the Panthers likely will have to find a solution via free agency or with a later-round draft pick. There could be good options in free agency with Derek Carr (Las Vegas Raiders), Tom Brady (Buccaneers) or possibly Lamar Jackson (Baltimore Ravens) available.

Carolina has only one quarterback under contract for 2023, 2022 third-round pick Matt Corral. There's interest in keeping Sam Darnold, the third pick of the 2018 draft, who finished this past season 4-2.

The risk here is not being able to draft a top quarterback in the first round in what is considered by many to be a strong class.

Vitt believes Payton outweighs the risk because of his offensive expertise and ability to develop talent.

"You have to get somebody in that building who can coach the quarterback position and coach the offense," he said.

Would the Saints really trade Payton to another team in the same division? If Payton starts winning the NFC South and beats the Saints the way he did the Panthers his last six seasons (9-2 from 2016 to 2021), fans in New Orleans wouldn't be happy -- but Panthers' fans would.

"You're trying to tell your fans we are invested in this thing, we're going to try to get the best people in here and use all the resources we have to be the best team in the National Football League," he said. "Steve Wilks is a really good football coach, and he did a great job.

"But man, when you have a known commodity running your building that knows how to win, you have to consider it."