CHICAGO -- Jimmy Butler says he had no idea that he was on the verge of scoring 50 points on Monday night.

"I was just playing basketball," Butler said after he scored a season-high 52 points in the Chicago Bulls' 118-111 win over the Charlotte Hornets. "I didn't even know how many points I had until the tech. Michael Carter-Williams was like, 'Yo, get 50.'"

Butler's performance was the latest highlight in a career year for the All-Star swingman. Playing without Dwyane Wade (left knee soreness), Butler had to take on more responsibility than usual in a game the struggling Bulls needed badly heading into back-to-back games against the Cleveland Cavaliers and the Toronto Raptors.

As has been the case throughout the season, Butler rose to the challenge.

As much as Butler tried to brush off some of the plaudits coming his way after the game, the reality is that this was one of the most dominant games of his career. Aside from the 52 points, he was 21-for-22 from the free throw line, which tied his career high for made free throws in a game. He had 12 rebounds, which gave him his fifth double-double of the season. He became the first Bull to score 50 points in the United Center since Michael Jordan did so in April 1997. He also chipped in six assists and said he was trying to get open looks for the rest of his teammates early in the game.

"Very impressive," Bulls small forward Doug McDermott said. "We've seen it before from Jimmy. But tonight the ball was moving, and I think it opened up things for him. He was taking easier shots rather than tough shots, like kind of what he's had lately." 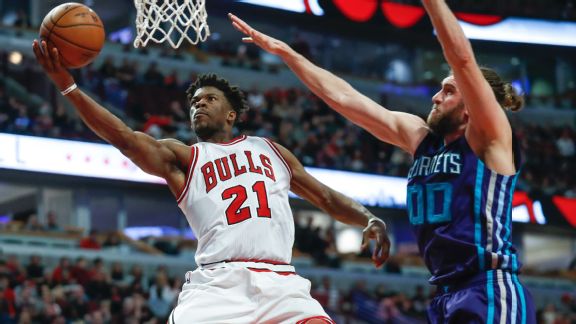 The Bulls' star became the eighth player this season to crack the 50-point mark.

The key in Butler's evolution this season is that he is attacking the rim more than ever. Not only is he not afraid of contact; he seems to seek it out. Butler believes he is in better shape than anybody else on the floor, and he is playing with the sort of confidence you see from the NBA's elite superstars. Butler has embraced the role of star and face of the Bulls. He plays like he has something to prove each time he steps out on the floor. He plays with an edge that the rest of his teammates can learn from.

"That's just basketball," Butler said of getting to the line more this year. "That's just giving what the game takes you, being aggressive. When you got guys around you that make shots, that's what makes it easy."

At this point in his career, Butler is buoyed by the belief that he can beat anybody when he steps on the floor. He trusts that he has put more work into his game than anyone else he's facing. On Monday night, he proved it.