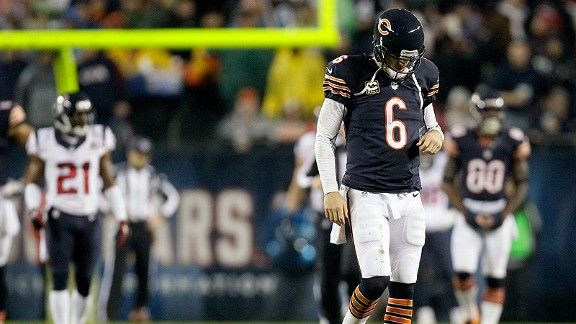 The Bears’ offense is more to blame for their recent 1-4 stretch. Not only are the quarterbacks turning the ball over more, the offense has been much less effective while it has possession of the ball.

Jay Cutler threw eight interceptions in the first eight games of the season. Over the past five weeks, Cutler and Jason Campbell have combined to throw seven picks, tied for fifth-most in the league.

The duo’s yards-per-attempt has fallen from 7.3 in the first eight games to 6.0 in the past five games, third-worst behind the Arizona Cardinals and Minnesota Vikings during that span.

Cutler and Campbell also have targeted Brandon Marshall at a very high rate, making their offense very predictable. In the first half of the season, Brandon Marshall was targeted on an NFL-high 37.9 percent of the Bears’ total targets.

Marshall has been thrown to even more in the last five games, getting 40.3 percent of his team’s total targets. He is also being tackled more quickly after the catch, averaging only 2.2 yards after catch per reception in his last five games, compared 3.7 in his first eight.

On top of the stagnating passing game, Matt Forte has been much less effective running the ball recently. Forte averaged 5.0 yards per carry during the first eight weeks of the season. Since then, that rate has fallen to 3.5.

Although it might be difficult to find many faults in the Bears’ defense, it cannot be totally ignored when debating which unit is to blame for the teams’ 1-4 record over the past five games.

During the Bears 7-1 start, Chicago’s defense accumulated 99.5 net expected points, by far the highest total in the league during the first nine weeks of the season.

It was not realistic to assume that the Bears could continue at this extraordinary pace, but their regression to the league average has been extreme in weeks 10 through 14.

During that span the Bears’ defense has added a total of three net expected points. That’s a far cry from the two touchdowns per game they had been averaging through Week 9.

The defense has been hurt by a lack of turnovers and struggles in the red zone. The Bears forced 28 turnovers in their first eight games, but just seven in their past five games.

During the 7-1 start they allowed a touchdown on 10.1 percent of their opponents’ drives, second-best in the league. During this recent slide, that rate has ballooned to 17.2 percent, which is tied for 11th over the last five weeks.