CLEVELAND -- Call him a mad scientist or a crazy uncle or a tinkerer, but you can't call Joe Maddon unsuccessful. After all, Maddon just became the second manager in Chicago Cubs history to win a World Series.

Maddon drew a lot of fire over the last couple of games in the Series because of some moves that were ... open to interpretation. Bringing in Aroldis Chapman in the seventh inning of Game 6 was the lightning-rod move. Then when Chapman came on the Game 7 in relief of Jon Lester, his velocity was down and he coughed up a three-run lead that, if things had turned out differently, might have gone down as the worst moment in Cubs history. 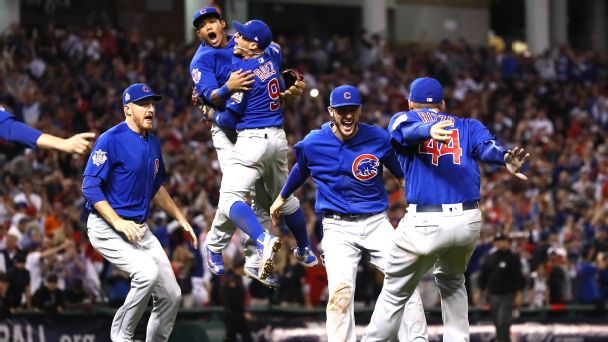 Yet the thing with Maddon is that no matter what quibbles you might have about his in-game tactics, focusing on that part of his managerial dossier is like looking at the color of the sky in the background of the Mona Lisa. You're kind of missing the point.

Maddon earns his keep at the season-management level. That is, he creates an atmosphere in which players stay loose and feel empowered. As a disciplinarian, he's more of a backstop than a Lombardi -- if something has to be said, he'll do it. Beyond that, he talks time and again about the need for veterans to do his bidding.

"I'd much rather the peers carry my message," is a common Maddon line. They did just that in Game 7, and it paid off.

In a kind of pathetic fallacy, the skies opened up at Progressive Field after the ninth inning, while the Cubs and their fans were still reeling from the fact that with four outs to go, their three-run lead had disappeared. The white tarps were unrolled over the infield and the teams retreated to their respective clubhouses.

"I walked off the field, the rain delay," Maddon said. "It's crazy how things happen for a reason. I don't know. But I walk off and I see them all gathering in that little room down below there, and they had a meeting. And I'm upstairs just checking out the weather map."

The meeting was led by veteran Jason Heyward, who playing in his first World Series, did not want it to end with a seventh-game collapse.

"It was starting to rain and I was like, they're going to pull the tarp and we need to get together and have a meeting," Heyward said. "Just needed to let these guys know they're awesome. Don't get down."

Given how stunning Rajai Davis' tying homer in the eighth was, and how much it ignited the Indians' portion of the crowd at Progressive Field, things could have spiraled out of control. And if the Cubs are honest with themselves, they hadn't played a particularly clean game. But the Cubs didn't win their first 113 games -- regular and postseason -- by laying down at the feet of adversity.

"It's about the whole team," Heyward said. "It's about everybody trying to get something done. I let them know that I loved them. ... We needed 114 wins, and I told them that everybody in this room, right now, was going to 114."

It was a win-one-for-the-Gipper speech that will resonate through Cubs history. And it impacted his teammates, even in the moment.

"He just wanted to get everyone together and remind us that we've been picking each other up since Day 1," Addison Russell said. "The whole team played lights-out. It was definitely a team win. We wouldn't be here without the team. It was just a great bonding experience."

And all that happened while the field manager was checking out the weather reports. It's like parenting -- you teach your children well, and then trust they will follow the lessons they've learned. Only normal parenting doesn't generally pay off with something as shiny and tangible as a World Series trophy.

"Like I told you, I hate meetings," Maddon said. "I'm not a meetings guy. I love when players have meetings, I hate when I do. So they had their meeting and the big part of it was, we don't quit. We don't quit."

Well, attribute it to what you want, but the Cubs came out of the rain delay on fire, putting up two runs in the 10th to give them what turned out to be their championship-winning margin. Then in the bottom of the inning, the Cubs closed it out with young Carl Edwards and Mike Montgomery finishing off what most nights would be Chapman's game.

That mix of veterans and youngsters, and the eccentric manager who oversees them all, is part of what made the Cubs so special. And they could remain special for a long time.

"It's really great for our entire Cub-dom to get beyond that moment and continue to move forward," Maddon said. "Because now based on the young players we have in this organization, we have an opportunity to be good for a long time, and without any constraints, without any of the negative dialogue."