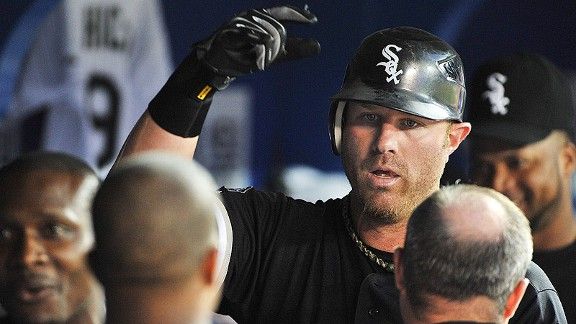 What is the statistical significance of Adam Dunn hitting his 400th career home run? Let’s run through a few notes:

Not surprisingly Dunn’s 400th career home run came on a pitch on the outer-third of the plate.

Over the last four seasons, Dunn has hit 58 home runs on pitches that the Pitch F/X tracking system judged to be on the outer-third of the plate or further away from him.

Only Ryan Howard and Carlos Pena have more such home runs in that span, with 59.

• The Elias Sports Bureau noted that Dunn joined Paul Konerko as the only teammates to reach the 400 home run mark in the same season.

Those two, along with Frank Thomas and Andruw Jones are the four players to hit their 400th career home run as a member of the White Sox.

• Dunn’s 400 home runs are the eighth-most of any player within the first 12 seasons of his major league career.

• Dunn is known as the Big Donkey and being big a big part of his game. He’s the third player listed at 6-foot-6 or taller on Baseball-Reference.com to hit at least 400 career home runs.

• What has Adam Dunn done best in his career? One aspect of that answer might surprise you.

The clutch home run has been an integral part of Dunn’s game. His 17 go-ahead home runs in the ninth inning or later are the most of any player in baseball since 2001, the year of his major-league debut.