CLEVELAND -- The Cleveland Browns played miserably in the first half against the New York Jets on Thursday night.

Quarterback Tyrod Taylor was hesitant and under duress, and the offense was doing nothing. Late in the first half, Taylor had completed just 4 of 14 passes for 19 yards, and the Browns were behind 14-0. 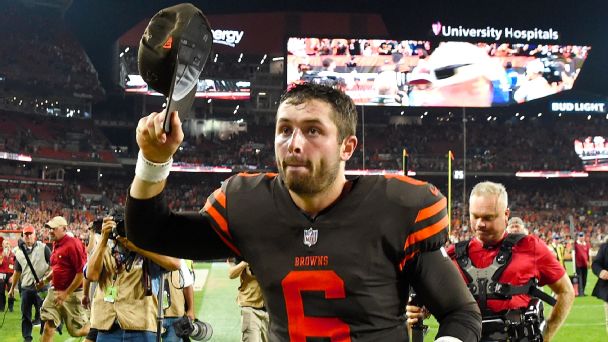 After a sack by Jets linebacker Avery Williamson, Taylor staggered to the sideline and was taken right to the medical tent, where he was diagnosed with a concussion.

Coach Hue Jackson went to rookie Baker Mayfield and told him, "Baker, you’re up." With 1 minute, 42 seconds left in the second quarter, Mayfield trotted onto the field.

What followed was one of the most electrifying debuts for a quarterback in Browns history, giving the franchise its first win since Dec. 24, 2016.

Here’s a look through the words of those who lived the 21-17 win:

The Browns are down and struggling when Mayfield takes over. Everyone feels Mayfield is ready for the moment.

Jackson: "I meet with Baker after every game in my office, and we sit and talk about a lot of different things. I always try to put things into context for him that this can happen, and when they do, how is he going to handle it? I am being very honest with you, he normally looks at me in my office and goes, 'Coach, basically, are you kidding me? I am going to go out there and play my tail off.'"

Mayfield: "Treat it like any other time. I have to go do my job. Don’t overthink it. Live in the moment."

Guard Joel Bitonio: "He was talking [junk] to the defense. He was ready to go."

Mayfield guides the Browns to a field goal on his first drive, but the energy he brings to the team and stadium are tangible. The Browns go to the locker room at halftime down 14-3.

Mayfield: "Just wanted to chip away. All points are good points at that point."

Wide receiver Antonio Callaway: "That juice. That fire. He is always fired up. He gave us a spark."

Excitement grows as Mayfield gets an early field goal and then guides a 69-yard touchdown drive to cut the Jets' lead to 14-12 with 42 seconds left in the third quarter.

Bitonio: "There were some good rhythm throws. He got to his point, he threw the ball and got it out of his hands. The crowd fed off it for sure. You could tell they were excited to have him out there. We got some first downs and moved the ball. That had an avalanche effect and got us moving on offense."

Mayfield: "You want to put them [the other team] on their heels. When you do that, the offense builds confidence. The defense will see that. They start to build that confidence as well. The crowd gets into it. When you get all three phases like that, it is pretty tough to stop."

After a 1-yard TD run by Carlos Hyde cuts the Jets' lead to 14-12, the Browns fail on a two-point conversion. But offsetting penalties give them a second try, and they run a direct snap to running back Duke Johnson Jr., who laterals to Landry, who then throws to Mayfield.

Bitonio: "We call it the 'Philly Special.' I think we saw Philadelphia run it in the Super Bowl and they said, 'Hey we can do that.'"

Jackson: "We did not steal that from them. Please. I know everybody wants to think that. We have had that in our back pocket for a while."

Landry: "We were on the sideline. [Mayfield] comes to me and says, 'Your ass better throw me that ball.'"

Mayfield: "I think that is how the play was drawn up. ... I was the first read, so I was hoping he was going to throw it to me."

Mayfield exults after the play, and the giant scoreboard shows him screaming toward the fans, who feed on the excitement.

Landry: "He [energized] the whole stadium. I am sure you felt it."

Jets linebacker Darron Lee: "He just made a couple of throws."

Mayfield finishes 17-for-23, and has three passes dropped. He also guides the Browns on a game-winning, 75-yard drive, with the Browns scoring the winning touchdown with 2:04 to go.

Mayfield: "Seeing things, [releasing] quickly and just trusting your guys to be in the spots that they are supposed to be in."

Jets quarterback Sam Darnold: "I know Baker is a great player. He’s done some great things at Oklahoma, and he continued to do great things tonight. I felt the crowd rallied pretty well around him."

Defensive end Myles Garrett: "I see it almost every damn practice. He is a winner. That guy has a chip on his shoulder, and none of this surprised me. I knew he was going to go out there and have a hell of a game whenever it was."

Landry: "He is special. He is really special."

A win at long last

Mayfield: "This city deserves it."