BEREA, Ohio -- The Cleveland Browns have their do-over.

Last year, the Browns seriously considered making Kevin Stefanski their head coach. Instead, they rolled the dice on another relatively unknown and inexperienced offensive playcaller.

The results of that were disastrous, as Cleveland finished 6-10 and fired Freddie Kitchens after only one season as head coach. 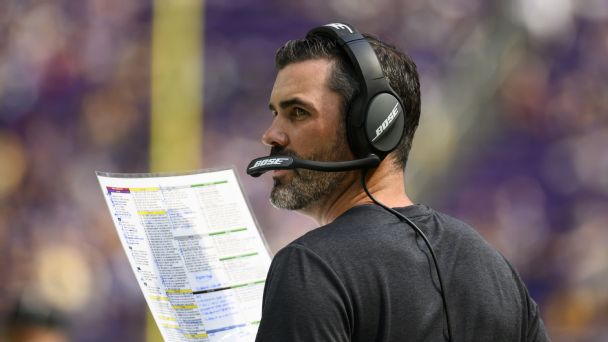 The Browns are banking that a move they could have made last year will now produce the opposite result. Namely, for the offense. And especially for quarterback Baker Mayfield.

The hire was a victory for Browns chief strategy officer Paul DePodesta, who pushed for the team to hire Stefanski just last year, according to multiple sources. Until recently, Cleveland had been operating with almost two separate front offices: the analytics department, headed by DePodesta, and the scouting department, headed by former general manager John Dorsey. Both reported to owner Jimmy Haslam.

Last year, Dorsey won the argument and promoted Kitchens from interim offensive coordinator to head coach. But that also led to Dorsey's demise, as Haslam fired the GM on Dec. 31.

Two days later, Haslam hinted at the divide within his front office and noted several times that the Browns would be searching for "alignment" this time around.

"That is what we are focusing on tremendously," he said before the search. "That alignment is something that is really, really important."

Finally, the Browns are on the way to having it.

DePodesta (Harvard) and Stefanski (Penn) are both Ivy League graduates who believe in analytics. Cleveland could hire another Ivy Leaguer with a similar vision if it brings in Eagles vice president of football operations Andrew Berry, who worked in the Browns' front office from 2016 to 2018. Stefanski will have a say in who Cleveland hires as GM to avoid, as Haslam put it, "an arranged marriage."

Either way, what matters now is what this means on the field for a team that hasn't been to the playoffs since 2002 and just featured the NFL's most disappointing offense in 2019.

For all its big names, including Pro Bowl running back Nick Chubb and wideout Jarvis Landry and two-time All-Pro receiver Odell Beckham Jr., Cleveland ranked 22nd in the NFL in offensive efficiency this season.

Most distressingly, a year after finishing second in the Offensive Rookie of the Year voting, Mayfield was last among qualifying quarterbacks in touchdown-to-interception ratio (22 touchdowns to 21 interceptions) and next-to-last in both passer rating (78.8) and completion percentage (59.4%).

"We need to do everything we can to help Baker realize his full potential," Haslam said on Jan. 2. "That is something all of us in this organization are focused on."

Two areas alone where Stefanski figures to help Mayfield immediately could be in passing plays outside the pocket and in play-action.

In addition, after Stefanski took over as Vikings play-caller in Week 15 of the 2018 season, Cousins was devastating in play-action, tossing 16 touchdowns with only one interception for a QBR of 83, according to ESPN Stats & Info. During that same span, Mayfield's QBR in play-action was only 67.

With Stefanski, the Browns -- like the Vikings this season -- have all the pieces around Mayfield to develop into an effective and efficient play-action offense in 2020, especially if the new front office can deliver upgrades at offensive tackle.

Chubb, after all, was second in the NFL in rushing during the regular season. Landry and Beckham, who both battled nagging hip injuries this season, remain big-play targets downfield. Kareem Hunt, assuming the team re-signs him, doubles as both a dynamic rusher and pass-catcher.

That could form the backbone of a top-flight NFL offense, which the Browns thought they had going into this season. Instead, they finished outside the top 20 in the league in scoring for a 13th consecutive year.

After firing a head coach for a fifth time since buying the Browns in 2012, Haslam said he was "more determined than ever to get it right this time." Turned out, that meant making the move that was there for him last year.