McCray, a former undrafted free agent, is a long shot to make the Browns roster. Wills, the 10th overall pick in this year's draft, has been entrusted with one of Cleveland's most critical jobs -- protecting Mayfield's blind side. Had this been a game, McCray likely would have sacked Mayfield. Even still, the pressure he exerted helped force Mayfield into throwing an interception at the goal line, which undrafted rookie Jovante Moffatt returned the other way to finish practice.

Any Day Can Be Draft Day

With our live draft lobby, you can be drafting a team in minutes. Jump into a draft >>

Going into this season, the Browns boast some of the best offensive talent in the NFL, headlined by the running back duo of Nick Chubb and Kareem Hunt and the wide receiver tandem of Odell Beckham Jr. and Jarvis Landry. Yet whether Cleveland actually has one of the NFL's top attacks figures to hinge heavily on whether its rookie left tackle can rapidly grow into the position and keep Mayfield upright.

"I think I've made a lot of progress," Wills said after Sunday's practice. "Moving along very quickly and just trying to get better."

Manned by perennial All-Pro Joe Thomas for a decade through the 2017 season, left tackle proved to be among Cleveland's biggest problems last season on the way to a 6-10 finish.

Greg Robinson, who thrived down the back half of the Browns' breakout 2018 season, struggled all last year. He was ejected in the opener of a 30-point loss to Tennessee and was benched in October. He was eventually inserted back into the starting lineup but continued to provide erratic pass protection, and he wound up ranking outside the top 40 in the NFL in pass block win rate among offensive tackles. In part as a result, Mayfield was sacked more often per passing attempt than any other quarterback in the AFC.

To begin the offseason, new Browns general manager Andrew Berry moved on from Robinson (just before he was arrested by federal agents, who found 157 pounds of marijuana in a rented vehicle in which he and two other people were riding) and targeted the draft as the solution to left tackle. While the Browns were intrigued by Georgia's Andrew Thomas, they were thrilled Wills fell to them at 10, even with fellow blue-chip tackle prospects Mekhi Becton and Tristan Wirfs on the board.

The only catch? As dominant as he was in college, Wills played right tackle for Alabama protecting the blind side of left-hander Tua Tagovailoa, meaning he would have to transition to the left side this offseason. That only grew more challenging when the offseason turned virtual due to the coronavirus pandemic, which steepened the learning curve this training camp.

"Rookies across the league are behind the curve," Browns offensive line coach Bill Callahan said. "What our goal has been is to bring him up to speed as fast as we can. We've really inundated him with techniques and walk-throughs. We have gone through several measures in the classroom showing him different players doing the techniques that we're asking of him. I think the progress has been positive, but you just do not know until you go up against live competition."

More on the Browns 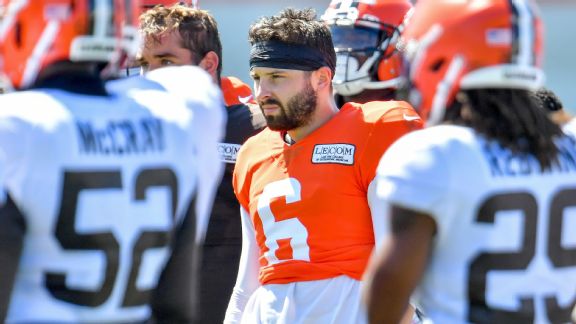 The live competition of training camp has produced uneven results as the Browns rush to get Wills ready, which has included throwing a combination of speed and power rushers at him. Wills has endured his share of false starts. He has lost some one-on-one matchups in team drills, like to end Sunday's practice. And he has seldom had to face off against All-Pro defensive end Myles Garrett, who mostly lines up on the other side of the field (though Garrett did vow to "welcome him to the NFL" when matched up against Wills). In fact, over the weekend, coach Kevin Stefanski had to be asked if he was still committed to starting Wills at left tackle in the opener. (Stefanski emphatically answered "Yes.")

"Every position. ... you're going to get beat," Stefanski said. "Whether you're a safety, a corner or a tackle, it just happens in this game. I haven't noticed that specifically from Jed, but I just know every player, young and old, is going to get beat, and then you have to bounce back. You just have to have a next-play mentality as a team and as a player."

The Browns will need that mentality out of Wills, who could suffer growing pains early, but he has the potential and talent to turn left tackle into a strength in Cleveland later on this season.

"It's a boost in confidence to know they're still behind me. ... [They] have full faith in me to get the job done," Wills said. "From my end, words can only do so much. So it's really up to me to keep getting better and fix some things I need to work on."