TORONTO -- With their stat lines equally underwhelming, the bigger competition between Kevin Love and Kyrie Irving in Saturday’s 99-84 loss to the Toronto Raptors in Game 3 of the Eastern Conference finals is which member of the Cleveland Cavaliers' pair had a bigger dud of an ending to their night.

Love, after putting up just three points on 1-for-9 shooting with four rebounds and two assists, sat the entire fourth quarter. The Austin 3:16 shirt Love wore as he walked out of the Air Canada Centre perfectly summed up his night -- because of his stone-cold shooting touch.

Irving, after shooting just 3-for-19 from the field (including 1-for-7 from 3) for 13 points with just one assist and three turnovers, had to be helped off the court and into the locker room before the game was finished while he clutched his chest. Irving later claimed the wind was knocked out of him by a blow from Cory Joseph, which is precisely how you could describe the Raptors bringing the Cavs’ perfect 10-0 postseason streak to a screeching halt.

It had been sunny skies for the Cavs’ young duo for quite some time now. Their shared redemption from an injury-marred postseason a year ago was inspiring and seemed to be getting stronger by the day. Love logged eight double-doubles through Cleveland’s first 10 playoff games, while Irving scored 20-plus points in nine of them.

Then Saturday happened and LeBron James looked like a man on an island, as he has far too often since Cleveland put its Big Three together. He totaled 24 points on 9-for-17 shooting, eight rebounds, five assists and two steals, while Love and Irving had their disappearing act.

As bad as it was, James -- who predicted Cleveland would face adversity somewhere along its postseason journey following the Cavs’ Game 1 rout of the Raptors -- spun it to a positive.

"We know they’ll be much better.”

It was a vote of confidence that was certainly earned by both Irving and Love for their postseason exploits up until Saturday.

And it is an opportunity, as much as anything, to solidify what they accomplished through the first two rounds. 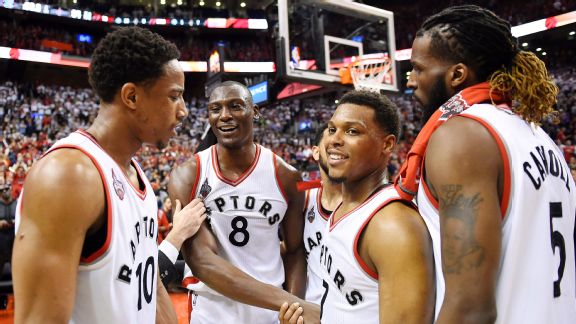 “They have all the tools,” said James Jones, one of the Cavs’ veteran leaders. “They’re tested. They’ve dealt with adversity and are well-equipped to deal with it. They know our schemes. They know what we want. They know what we need. And that doesn’t change, regardless of their performance tonight.

"We need them to come back next game and play, give more effort, more energy, be more consistent and trust in themselves and in our scheme, and we’ll be fine."

“It’s no different than any other challenge that they’ve faced where they’ve had to go back and recalibrate and figure a level of it out by themselves," Jones continued. "Because that’s their burden for this team, is to be able. They’re good enough, and we need them, to figure out. So I don’t have any issues or worries that they’re going to be able to.”

There is no hiding now. There's no easy out against guarding Russell Westbrook by blaming bed bugs, no room for pouting because of lack of touches. The Cavs’ locker room is waiting to see how Irving and Love respond and know that, for the most part, now is not the time for hand-holding. Game 4 is a show-me game for both of them.

They both accepted that reality.

“This is the game that really builds the character of our team,” Irving said. “We’re looking forward to Game 4 and preparing for it over the next two days.”

As Love added, “I think [their defense] was just being aggressive, but I need to match and be just as aggressive, and tonight I wasn’t. I felt like I was a little bit passive, and I have to come out Monday night and just have that type of mentality and do better on that end. I feel like it, from a mentality standpoint, it’s an easy fix.”

If Irving and Love don’t course correct, there will be nothing easy about going back to Cleveland tied 2-2 with all the pressure pointed directly at them for underperforming. There was a sentiment within the team late Saturday night that of course the adversity will be good for Irving and Love ... if they respond.

If they don’t? Then all the momentum the team built over the past five weeks is suddenly called into question.

For now, the Cavs’ championship chase waits on two men.

“Growth usually happens after pain,” Jones said. “No different than being in the weight room: You hit it one day, and the next day you lift and you come back sore, but you get bigger and better. Growth usually follows pain.”