OAKLAND, Calif. -– Channing Frye's Cinderella ride through the 2016 postseason turned pumpkin-like after just seven measly minutes of playing time Thursday in the Cleveland Cavaliers' 104-89 loss to the Golden State Warriors in Game 1 of the NBA Finals.

A linchpin on coach Tyronn Lue’s secret-weapon lineup -- one also featuring LeBron James, Matthew Dellavedova, Iman Shumpert and Richard Jefferson -- was Frye, who spaced the floor and connected from long range for a unit that averaged an obscene 133 points per 100 possessions in 70 minutes played together against Detroit, Atlanta and Toronto.

Yet the lineup, which didn’t play a single second together during the regular season, played just one minute in Game 1, as Lue felt uncomfortable with how it would perform against Golden State’s micro five of Andre Iguodala, Shaun Livingston, Leandro Barbosa, Harrison Barnes and Draymond Green.

“I thought the matchup was kind of hard,” Lue explained Friday. “When we went from Channing and LeBron in that 4 and 5 lineup, they went small. But Channing's a big part of what we do, so I have to find a way to keep him on the floor.”

Frye, averaging 8.1 points on 61.2 percent shooting during the playoffs, scored just two points in the opener on two free throws, finishing 0-for-1 from the field after missing his lone 3-point attempt.

His nosedive in production typified the night for the Cavs’ bench as the Warriors’ reserves outscored them by a staggering 45-10 margin.

While a team source admitted to ESPN.com that the Cavs “probably could have stuck with it longer” when asked about the second unit featuring Frye, Lue clearly was trying to trump Golden State coach Steve Kerr’s plan against it by quickly abandoning the look for which the Warriors had prepped.

“I think it’s just an adjustment period,” Frye said. “It’s different. They had a game plan for when our second unit got in there, so I think it’s just an adjustment and we got to play better. That second unit has to give that first unit a break. Coach is going to find the right guys to be out there. I think we’re all ready. We’re all prepared to help win games and we feel pretty confident in that.”

Dellavedova said the Warriors’ defensive approach with their bench thwarted the Cavs’ bread-and-butter high screen-and-rolls with their subs. 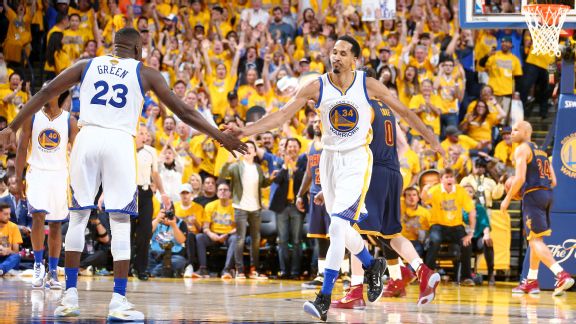 “Their second unit plays a lot different style to their first unit and other teams in general,” Dellavedova said. “They like to switch a lot of things, which takes away our triggers for the [options] on pick-and-rolls. That’s something we’ve looked at and we’ve talked a little bit about, and we will for the next couple of days so we’re ready to put in a better performance as a bench unit in Game 2.”

The backup point guard agreed that the Cavs’ bench group could have become a victim of its own success, as it was impossible for the unit to fly under the radar on an opponent’s scouting report after its impact in the first three rounds.

“I think so,” Dellavedova said. “I think by the time you get to this point in the season, everyone knows what the other team is going to bring to the table and that unit, that we didn’t really use in the regular season was obviously pretty successful for us. ... I think we’ll try to do a few different things and come out with a better defensive effort against their second unit next game and see what happens.”

Livingston scored 20 points on 8-for-10 shooting, Barbosa scored 11 on 5-for-5 and Iguodala dropped in 12 on 5-for-9 to do the bulk of the damage. Of course, the odds are remote that those three will all play that well together at the same time during another game in this series.

Cleveland’s bench has to prove itself once again, a chance James says is deserved despite the Game 1 slip-up.

“You don't just throw everything away over one game,” James said. “Our bench has been so productive for us. They know they're going to have to have a great series in order for us to win it. So we have a lot of pride in there from our bench, and I know they're going to take that even better going into Game 2.”