After many turnovers, LeBron James looks for a turnaround
5yDave McMenamin
The challenges the 76ers will face in trading Ben Simmons
Philadelphia 76ers
1dBobby Marks
Lowe: The five most intriguing players in the NBA this season
Los Angeles Lakers
3dZach Lowe
NBA preview: Everything you need to know for the 2021-22 season
2d
Jun 6, 2016

OAKLAND, Calif. -- LeBron James' assessment of the Cleveland Cavaliers' 110-77 loss to the Golden State Warriors to fall behind 2-0 in the NBA Finals on Sunday was appropriately dour considering the score.

"We didn’t win anything," James said as he sat at the postgame podium. "[In] no points of the game did we beat them in anything."

There is plenty of blame to go around for this Cavs team with the second-highest payroll in league history that suddenly can’t buy a bucket with a title on the line, shooting just 35.4 percent as a group in Game 2 after what seemed like an as-bad-as-it-gets 38.1 percent in Game 1:

And then there is James.

His series averages, in a vacuum, are exemplary: 21 points, 10 rebounds, 9 assists and 3 steals per game so far. The unfair truth of the situation, however, is that if there is one person to point to explain the reason for Sunday’s result, it’s probably him.

"I got myself in a lot of trouble tonight personally," James said. "Turned the ball over way too much. And I said after Game 1 we just can’t turn the ball over against a great team and expect to win, and I had basically half of the turnovers."

James had seven turnovers, to be exact. Against a team as lethal as Golden State in the open court, gifting that many possessions and trying to compete is like bowling with a beach ball and expecting to still knock down pins.

"No heart, no toughness, no resilience," one source close to the team told ESPN.com. "Those three things are LeBron included."

There was seemingly history on James' side going into Sunday. He had been 9-0 in his past nine postseason games played with his team facing a 1-0 series deficit, always finding a way to even it up ever since that buzzer-beater he hit against Orlando in 2009. He had won a road playoff game in 25 straight series, besting Michael Jordan's previous all-time best mark of 24. He had that epic 39-point, 16-rebound, 11-assist effort in an overtime win in Game 2 at Oracle Arena last year, and that was with the team missing Love and reeling from the news that Irving also would be out for the rest of the postseason. 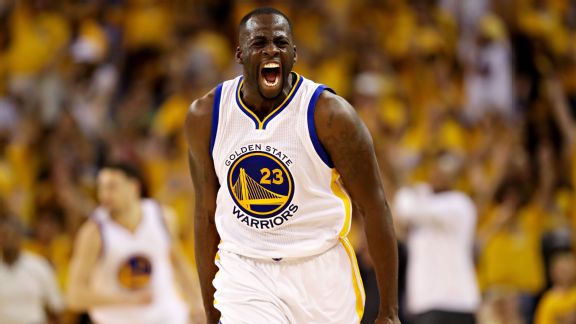 Draymond Green lit up for 28 points as Golden State outscored Cleveland by 63-41 in the second and third quarters to hand the Warriors a 2-0 lead in the 2016 NBA Finals.
Box score »
Game highlights »
Fan reaction »
Game HQ »
2016 NBA Playoffs coverage »

Then again, never before had he faced a team like Golden State, which made its own stake on history Sunday, pushing its overall record to 87-14 for the regular season and postseason combined, tying the 1995-96 Chicago Bulls (87-13) as the only other team to amass that many wins from opening night until the close of the Finals.

And that’s saying nothing of James’ defense, which was marred by slow closeouts on Green all night, contributing to his 5-for-8 mark from deep. Nor does it account for his body language, which showed the stress of the night when Golden State started its onslaught in the second quarter.

"He struggles," said James Jones, who has played with James the past six seasons. "He doesn’t want to have a bad game. He fights it. Some games when he’s struggling, he’ll fight it, and sometimes he’ll dig himself a deeper hole because he has the ability to climb up out of it. So, the only thing is that he’s overly competitive. Sometimes that can get in the way, where he wants it so bad he’ll go for the home run. He’s had [bad games] before. He usually bounces back. One thing I know for sure, his confidence never wavers. So we don’t have to worry about that."

Cleveland, of course, would not be back in the Finals for a second consecutive year without James. The appreciation for his positive impact on the franchise goes without saying.

But it cuts both ways. His teammates, understandably, rely on his consistent excellence. When he doesn’t live up to his own ridiculous standards, not only does it show in the box score, but it weighs on the team’s psyche as well.

"That’s something that we as teammates have to be better at," Jones said. "At the end of the day, we’re responsible for ourselves. So, we can feed off him and he can provide us leadership and pace us and tempo, but we have to be able to pick him up, too. It’s not a one-way street. So, his mood definitely impacts our team, but as a mature team, we have to be better than that. We have to understand when he doesn’t have it going, when he’s struggling, we have to go to another level to pick him up."

"I think we all need to be better," added Matthew Dellavedova. "It’s not just one guy. It’s a team thing. And for us to beat them, it’s going to take everybody."

Last June, with the Cavs down 3-2 and facing elimination before Game 6 back in Cleveland, James infamously boasted, "I feel confident because I’m the best player in the world. It’s that simple."

When asked about the prospect of how he’ll spend his time before Wednesday’s Game 3 -- something that might as well be an elimination game, as no team in league history has ever come back from a 3-0 deficit -- he was far more reserved.

"The next couple days ... I won’t be reflecting," James said. "I’ll figure out ways I can be better, starting as soon as I leave this podium. Probably go back to the room and watch the game, re-watch for ways I could have been better ...

"I’m one of the guys who kind of always wants to shoulder the blame and take the blame when we don’t play as well as we should. It’s just how I am. And I’ve got to be better."

It’s the Cavs' only hope.