CLEVELAND -- The Cleveland Cavaliers are off to the best 3-point shooting start in league history, and if they can sustain it, they could have an even more prolific season from downtown than the “Splash Brothers”-led Golden State Warriors did last season.

Cleveland knocked down 14 3-pointers in its 100-93 win over the Charlotte Hornets on Sunday and became the first team to hit 10 or more triples in its first nine games (besting the 2014-15 Houston Rockets’ mark of eight).

Although they resisted the label of a “jump-shooting team" last season, there is no denying the role that the 3-ball plays for the Cavs. In fact, Cavs coach Tyronn Lue thinks Cleveland hasn’t shown its full barrage just yet.

“We have a lot of great shooters,” Lue said. “I think we can even make more shots. I think we’re missing a lot of open shots that we normally make. It’s going to come once the season gets going. I think our shots will come along a lot better.”

He has a point. J.R. Smith, Cleveland’s most accomplished long-range launcher, is making only 36.4 percent of his 3s this season, after he connected on an even 40 percent last season. Mike Dunleavy (39.4 percent to 26.9) and Richard Jefferson (38.2 to 23.5) are also struggling. Even so, the Cavs have been nearly unbeatable and setting records along the way.

With LeBron James and Kyrie Irving being two of the better players in the league at breaking their men down one-on-one off the dribble to get into the paint and both possessing the court awareness and passing acumen to find an open teammate once the opposition collapses on them, Cleveland has a great thing going with the way its roster is constructed. It’s a model James admits is “similar” to what the Miami Heat ran, utilizing him and Dwyane Wade as catalysts with the likes of Ray Allen, Mike Miller, James Jones, Mario Chalmers, Rashard Lewis and even Chris Bosh around them.

“I pretty much know what personnel works for my type of basketball game,” James said of how the Cavs evolved to this point since the summer of 2014. “So I knew what we needed. I know it works for me. And I think our GM and our coaching staff have done a great job of fulfilling that.” 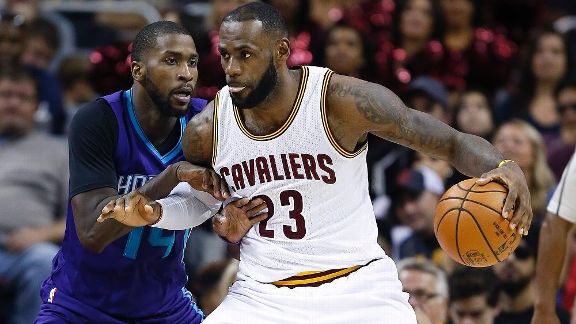 Serge Ibaka returned to OKC in winning fashion, Andrew Wiggins dropped in 47 and last season's finalists put on a show.

Putting the Cavs over the top has been Channing Frye. The 7-footer, acquired from Orlando at last season’s trade deadline, went 6-for-12 from the outside Sunday. It continued the tear he was on the past five games, in which he went 12-for-23 on 3s and shot up the leaderboard into the top 10 in 3-point percentage in the league so far this season.

Frye revealed Sunday that he has been used in some sets running the same plays Smith does at 2-guard. Combine that revelation with the fact that James has been running the point a lot this season, and you’re talking about a Cavs backcourt that at times runs 6-foot-9 in James and 7-foot in Frye, with three more shooters capable of hitting from deep on the court (in the fourth quarter against Charlotte, it was Jefferson, Iman Shumpert and Jordan McRae).

That isn't just going with the league trend of more 3s. That’s changing the game. Especially because with their versatility, the Cavaliers can come back down the other end and put James as the 4 and Frye as the 5 on defense.

“Big guys like the paint,” Frye said. “I make them allergic to it. It’s just kind of how it is. You know when you have that train [James] down there or when Kevin [Love’s] going, Kyrie’s going, their big guy ... wants to help. But he can’t help. So he’s got to come to Frye-land. Just sit out there with me. So it’s a pick-your-poison kind of thing. I think when we’re all going, we’re all hitting, it’s pretty tough to guard.”

Opposing defenses could say they are going to just stay on the Cavs' shooters no matter what and go one-on-one against the likes of James, Irving and Love, but that has its dangers as well.

"If you’re living with me getting 40, LeBron getting 40 and Kev getting 40," Irving said of the suggested scheme. "If you’re not going to basically play us honest, you’ve got to live with something."

The Cavs plan to continue living -- and thriving -- outside the arc.

“We have great shooters,” Lue said. “I just think that we can make more shots.”