CLEVELAND -- Back in June, when the Cleveland Cavaliers eviscerated 52 years of championship disappointment for their city with three plays that will live on in sports lore forever more -- The Block, The Shot and The Stop -- there was a fourth play, The Near-Dunk, that might have superseded them all.

With 10.6 seconds left in Game 7 of the NBA Finals and the Cavs clinging to a three-point lead, Kyrie Irving darted into the paint as LeBron James filled in the wake behind him, receiving the dish from Irving and attacking the rim like he was shot out of a cannon, with only Draymond Green between him and what would have been one of the most dramatic deciding moments in Finals history.

Instead, Green and James collided in the air, James’ dunk missed and he took a violent spill onto the hardwood, earning two free throws. James hit one of them to give Cleveland the final cushion it needed to win the game, but the play is only remembered for what it could have been rather than what it was.

Six months later, with the Cavs in the midst of a furious fourth-quarter comeback against those very Warriors on Christmas Day, James had a chance to make amends.

“I had a flashback when I was cutting,” James said, describing the scene with less than two minutes to go and the scored tied 103-103 after the Warriors’ 14-point fourth-quarter lead had dried up.

Once again, Irving had the ball in his hands, and once again, James surged in behind him.

“Kyrie, he sees me, and if he gives it to me [I thought], ‘I've got to get this one home because I wasn't able to get the one back in June and all,’” James said. “Kyrie made an unbelievable pass and I just tried to make myself aware. I believe in energy, the ball will find energy, and I was able to slam it home."

The dunk gave Cleveland the lead in their thrilling 109-108 victory in a game that had all sorts of reminders of last season’s Finals showdown.

There again was Irving hitting the deciding dagger -- this time a turnaround fadeaway jumper over Klay Thompson rather than a pull-up 3-pointer over Stephen Curry. There again was Green losing his cool, getting called for a technical foul less than three minutes into the game, bringing to mind his suspension-causing altercation with James back in Game 4. There again was Curry being outclassed on both ends of the floor by Irving, just as he was in Game 7, as the Cavs star put up 25 points, 10 assists, 6 rebounds and a career-high 7 steals compared to 15, 3, 3 and 3 for the two-time MVP. 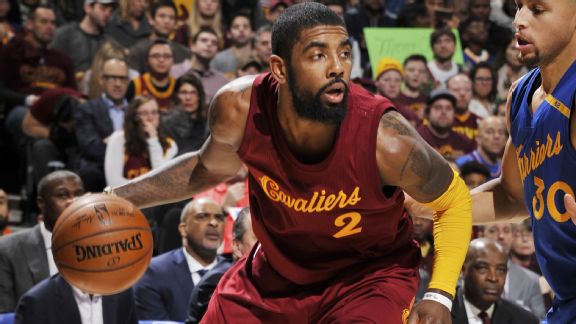 The Cavs and Warriors put on a holiday classic reminiscent of a Finals finish.

• Finals flashback with added LeBron punch
• Warriors left at a loss in Cleveland
• Stats: Numbers tell Warriors-Cavs tale
• Westbrook lights up the young Wolves
• Horford shows Celtics' potential
• Knicks in giving mood on Christmas
• Santa Melo: You get a car ...
• Aldridge's hot night fuels Spurs over Bulls
• Butler: Woes are 'a little bit of everything'
• Lakers continue to be far ahead of schedule

Back in October, at James’ Halloween party that made headlines for its mock tombstones that memorialized the Warriors’ lost 3-1 Finals lead, sources told ESPN.com there was even a dummy dressed up like Curry on the floor of the haunted house that guests had no choice but to walk over when they arrived to get to the party.

On Sunday, the Associated Press’ Tom Withers noticed a door open down the hall from the visitor’s locker room, leaving an image of James’ block on Andre Iguodala -- but with James having a championship ring photoshopped on his left hand -- in plain sight to anyone walking by. (That seems to have been more of a happy accident than planned trolling as that image has been up for weeks and the door often is open before games, according to a source.)

The Cavs have made strides to put last season’s title behind them in order to concentrate on their goal of repeating as champs. While it seemed like every in-arena video presentation involved a shot of the Larry O’Brien trophy in the early going this season, things have mostly returned to normal.

Sunday was a brief break from that, which is understandable considering the opponent. Ironically, the Cavs' Christmas Day uniforms didn’t come with a “1X” championship tag on the back collar, and the team went out and played with the same hunger it had when it was trying to earn that first title and their uniforms also were missing the tags.

But things have changed since June. From Kevin Durant’s free-agency decision to join Golden State to J.R. Smith’s right thumb injury, the rivalry continues to evolve.

As for Sunday’s result providing any clues as to who would be the favored team in a potential GSW-CLE III, pump the brakes.

And, in James’ case, making up for a high-level play that eluded him in the past.