The Cavs, the best team in the Eastern Conference, led the Nets, the worst team in the East, by 18 heading into the fourth. A couple of solid minutes from Cleveland to start the final frame and the starters are already icing their knees on the bench before the buzzer sounds, getting ready to enjoy the rest of their night in the Big Apple.

Instead, Irving's 16 points in the quarter while playing all but 27 seconds of the fourth, became paramount in securing a 116-108 win.

"For us to fully reach our potential, when we get teams down, then let's try to keep them down," LeBron James said afterward. "And having an 18-point lead to start the fourth and they went on a quick (12-0) run and even though we know we're capable and we know we can win tough games or close games, let's see if we can go from (up) 18 (points) to 22 sometimes, or 24. Make the other coach, instead of us calling timeout, make the other team call timeout. So it's something we want to continue to work on, too."

That said, it's not as if seeing Irving go off in the big city in his first time back on the court in eight days after he battled a right hamstring strain was such a bad thing.

"Absolutely," James said when asked if he likes what he sees out of Irving in the clutch, just like the Brooklyn crowd did. "What's not to enjoy? He's special. He loves big moments and no matter if a team with a record that they have and the record that we have, if the game's going to be close, he's going to step up to the plate and it's great to see him come through." 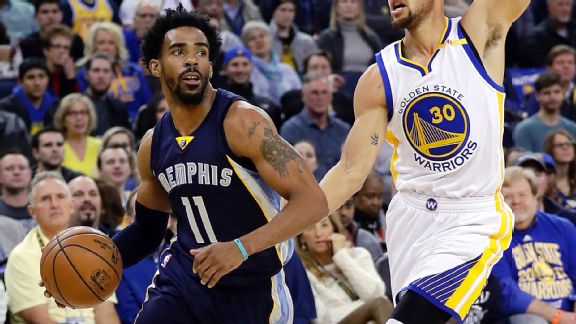 Mike Conley drained a clutch jumper to send the game to OT, where the Grizzlies defeated the Warriors 128-119.

For the long haul in the Cavs' quest for a repeat title, the most important thing out of Friday was seeing their second-best player in Irving return after missing three games from what can be a tricky, haunting injury.

"It was a long one, man," Irving admitted. "Seemed like eight days is an eternity in the NBA life, but missing those three games was definitely necessary. ... For me going forward and for the rest of my life, I will never take any hamstring that anyone has for granted because that's how you make your living, that's through your legs. So, just wanted to take the necessary time and do whatever is needed. Whether that was three games, four games or any amount of games. Just wanted to do the best thing for my body."

To borrow James' word: absolutely. That is the proper perspective out of Irving.

But in the short term, having a night like Irving did back where he grew up is simply good for one's basketball soul. Not to bring up Phil Jackson's old stirring of the pot, claiming that Kobe Bryant threw his high school games when they were blowouts so he could feel the pressure of having to make plays that matter in the fourth quarter, but ask just about any player what's more fun and they'd rather leave the court having impacted the outcome down the stretch than having things be decided by halftime.

"I really just started to get pissed off," Irving said of what changed, after he started the game 4-for-14 from the field. "Just, the momentum was shifting. We had a few plays, a few opportunities at the rim, a few in-and-outs, but we weren't executing plays. As the point guard, I take full responsibility for that. So going into that fourth, the start of it, (the lead) cuts down to 11, gets to eight, and then at that point it just comes out of me naturally. Being in that fourth quarter, being ready for whatever situation I'm put in. Just being aggressive and just making the right plays."

Again, the "right" way to end the thing would be the Cavs not needing the extra flurry from Irving in the first place, but it certainly was not a bad way for Irving to make his return to the court, either.